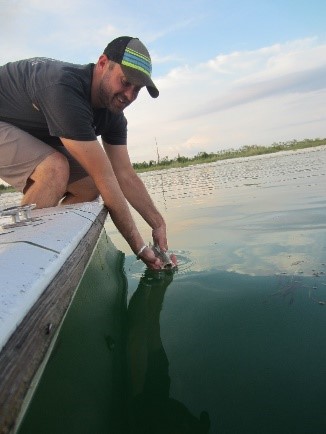 Graduate student, Chris Biggs, collects a spotted seatrout to help determine their spawning habitats. Courtesy photo. Spotted seatrout, Cynoscion nebulosus, are among the most sought after fish by recreational anglers throughout the Gulf of Mexico. From April through September, seatrout congregate in large groups along the Gulf of Mexico coast and in the estuaries to spawn. They often remain in their estuary that they were born in, creating subpopulations in the different estuaries. This makes collecting estuary specific information to individual estuaries even more important.

Incomplete information exists on spawning for spotted seatrout, particularly in Texas. Knowledge about how spawning activity and abundance coincide with specific habitats, such as seagrass beds, oyster reefs, oil/gas platforms, or navigation channels is limited. How the spawning aggregations change in different environmental conditions, such as salinity, temperature, and depth is also not well known. This information is necessary to understand the current status of seatrout populations in Texas and to help us predict how this valuable fishery may change over time.

Project Goals
1. Map spawning locations and habitat of spotted seatrout in local bays and estuaries surrounding Port Aransas.
2. Assess how activity and abundance of spawning seatrout varies among habitats and environmental conditions.
3. Work with local anglers to collect data on the timing and locations of seatrout spawning.

How We Did It
Spawning aggregations are mapped using hydrophones placed in the water at each survey site to make 1-minute recordings of the sound produced by male seatrout during spawning. The drumming sounds of seatrout are only produced during the spawning event, just before and after sunset. Temperature, salinity and bottom habitat information were also measured at each site. The project team also engaged recreational anglers and guides to locate potential spawning sites and collect samples of ovaries from females for information on spawning activity patterns. 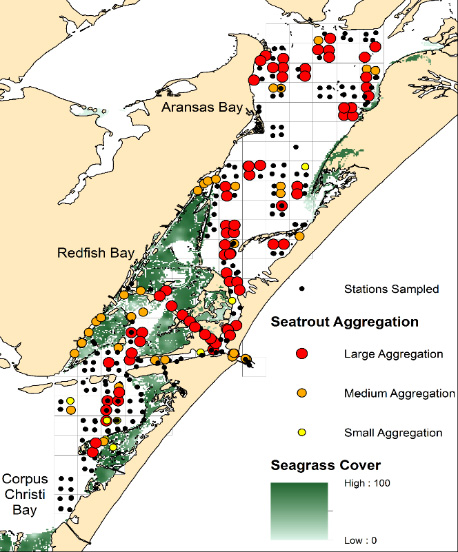 Findings
Spawning sounds were recorded on a daily basis from May 10 to September 27, and sites varied a lot in terms of spawning activity and fish abundance based on the loudness of recordings. Specifically, our data has identified several large aggregations of spotted seatrout in specific areas within Corpus Christi, Redfish, and Aransas Bays. While seatrout spawning aggregations were common alongside the deeper edges of seagrass beds, some of the largest and loudest aggregations seemed to occur in the deep areas of shipping channels, such as the Lydia Ann and Aransas Channels.

Future Work
Next year, we will install hydrophones at 10-15 sites to record spawning activity continuously over the entire spawning season. We will also conduct split-beam sonar surveys to monitor the abundance of seatrout at each site over time. These new data will be combined with continued collection of water and habitat measurements and collection of female ovaries. The combination of precise information on spawning activity, fish abundance, and habitat features will provide a more complete picture of the conditions that support the most important and consistently productive spawning aggregation sites for seatrout.