A tale of the ciliate tail

Scientists have recently discovered that some protozoans can move faster than the blink of an eye. Using ultra high speed video cameras and specialized optics researchers from The University of Texas Marine Science Institute and the Woods Hole Oceanographic Institution have discovered that ciliates with tails can use these appendages to move at incredible speeds, nearly 1500 times their own size every second, which is 11-33 times faster than their non-tailed counterparts. To put this rapid speed in perspective, a cheetah only moves at peak speeds of 20-30 times its own length every second. Interestingly, they don’t use the tail as you might expect, such as beating it back and forth to generate force for swimming. These organisms rapidly contract the tail inwards and pull themselves forward. They can also respond to a threat with one of the shortest escape response times every measured, 0.89 milliseconds. An impressive feat considering it takes 5 milliseconds for a honey bee’s wing to flap and a whopping 300 milliseconds to blink your eye.

The researchers also found that the flows created by the rapid tail contractions create two very short lived vortex rings that are mirror opposites of each other. This has the advantage of providing ‘hydrodynamic camouflage’ as the predators (which don’t use eyes to hunt) would be unable to distinguish the direction that the ciliates are escaping.

So why do these single celled animals need to travel at such rapid speeds? Ciliates are at the base of the food chain, which means that they are food for almost everything except for bacteria. Those ciliates with tails have a unique advantage because it allows them a much greater chance to escape from predators.

The scientists’ (Brad Gemmell, Houshuo Jiang, and Ed Buskey) paper discussing their research and results is featured in the Proceedings of the Royal Society journal - released today, July 15th. 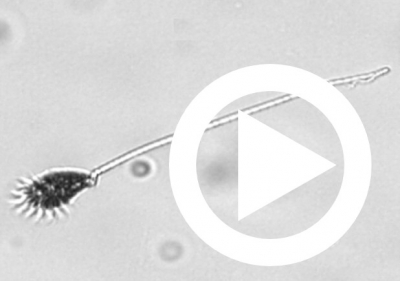