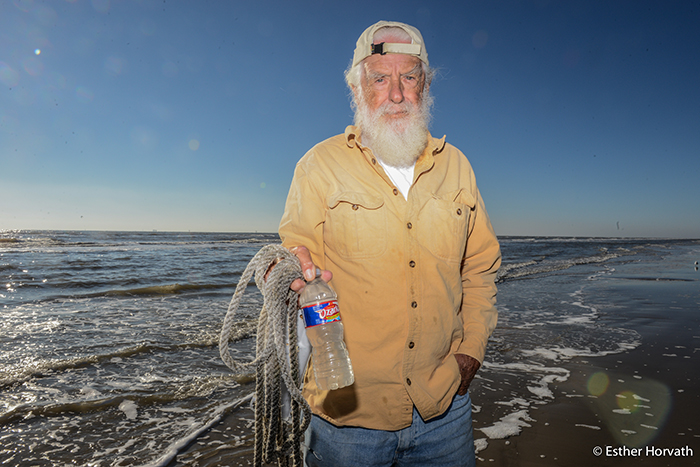 The University of Texas Marine Science Institute and the Texas’ Gulf Coast lost a true crusader for our coastal beaches and its wildlife. Anthony F. Amos, died Monday, September 4, 2017 at the age of 80 from complications of pancreatic cancer.

Tony has long been a larger-than-life presence in our community, region, indeed nation.  He was a passionate naturalist, educator and a font of knowledge.  “He could be a pain sometimes, but most great people are. It certainly didn’t make him any less lovable,” remembered The University of Texas Marine Science Institute (UTMSI) Director, Dr. Robert Dickey, with a sad laugh.

Amos was a husband, father, oceanographer, writer, prolific data recorder, and animal rehabilitator.  He has also written over eight book/book chapters, over 50 scientific publications, and wrote a weekly newspaper column for the Port Aransas South Jetty.

Tony first saw ocean trash in the Indian Ocean in 1965 which inspired him to begin his last four decades of monitoring and recording information on the beaches of Mustang and San Jose Islands. He compiled incredible long-term data sets from his beach observations of shore birds and his characterization of beach debris that washed ashore. He advised then Texas Land Commissioner, Garry Mauro, and the Center for Marine Conservation on the first Adopt-a-Beach cleanup in 1986 where data cards were used. He worked tirelessly to rescue and rehabilitate sea turtles and birds, including piping plovers, red knots, brown pelicans, and bald eagles. Tony was an engaging, entertaining and known educator for wildlife conservation in the Texas Coastal Bend region.

Tony’s passion inspired others like Edith McAllister and the late Perry Bass to build the Animal Rehabilitation Keep on UTMSI property, recently renamed the Amos Rehabilitation Keep, or ARK. The ARK rehabilitates stranded and injured sea turtles and marine birds. Over 2,500 sea turtles have been released since the ARK’s beginning in 1982. Tony was one of the most visible people in the Texas Coastal Bend with regard to cultivating the public’s interest in coastal wildlife and explaining the need for conservation of birds, sea turtles, and other wild creatures. “His passion and enthusiasm for conservation was contagious,” said Jace Tunnell, colleague and Director of the Mission-Aransas National Estuarine Research Reserve at UTMSI.

A Texas legend has been lost but his spirit and legacy will live on through those he has touched.

Gifts in his memory may be given to The University of Texas Marine Science Institute, Amos Rehabilitation Keep, 750 Channel View, Port Aransas, Texas 78373 or through Online Giving (select subdepartment in drop down menu for Anthony F. Amos Endowment for the ARK)

Anthony F. “Tony” Amos of Port Aransas died on September 4, 2017 at a hospice in San Antonio where he was under care for end-stage pancreatic cancer.  He was 80 years old and had recently been honored at a large fundraiser in Port Aransas (P.A.) as the founder and director of the ARK, the Animal Rehabilitation Keep, which resides on the grounds of the University of Texas Marine Science Institute (UTMSI). The ARK was renamed the Amos Rehabilitation Keep earlier this year by the University in honor of his work with stranded and wounded sea turtles and birds.

Tony Amos was a tall strong white-haired, white-bearded naturalist whose study of the beaches of Mustang and San Jose Islands was world-renowned.  He spent thousands of days counting birds and trash on these islands and telling the public about his finds and observations in his weekly column in the Port Aransas South Jetty newspaper.  He taught the citizens of these barrier islands how fragile their ecology was, and was named a 2010 NOAA Environmental Hero.  He was a regular speaker on marine phenomena at service clubs and on television.

He was the winner and honoree of many prizes and recognitions, including being among the first twenty Texas Monthly Magazine “most interesting Texans.”  He was indeed a Texan in spite of having been born in London and coming of age on the island of Bermuda. His elegant voice and English accent never left him, however, and made him all the more compelling as a teacher.

Tony was an electronics "supertech," which in 1963 led to his career as a research scientist in Physical Oceanography at Columbia University's Lamont-Doherty Geological Observatory, New York.  In 1976 he was hired at UTMSI in Port Aransas.

In spite of being a naturalist who worked for the UTMSI for 40 years and who made dozens of trips to Antarctica on scientific expeditions, Tony was an autodidact who did not have a college degree.  His curiosity and erudition belied this fact, as did his many papers and other writings.  He was a brilliant scientist whose experiential knowledge and empirical observations were equal to any.

Tony was married for 59 years to his beloved Lynn.  They met on her home island of Bermuda.  They had one son, Michael, whose wife Tallia and two adored children, Galoran and Gabriel, live in Los Angeles.  As Tony weakened in the year of his cancer, Michael spent time in P.A. helping his father with his beach studies.

One of the last honors bestowed on Tony was the naming of the Port Aransas beach after him by the City of Port Aransas.  P.A. and that beach are somewhat the worse for wear after the recent hurricane, and they will not have their Tony, the “Guardian of Our Gulf,” to know what to do to help.  But his countless fans may remember how to behave toward the nature of their sandy home, and if they do it will largely be because of Tony.

At his request, Tony’s ashes will be scattered at sea at a future date.