An Insider View to Fisheries Ecology Research in the making: Cabo Pulmo 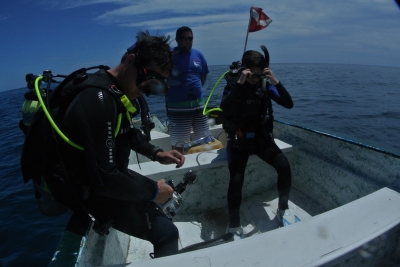 Figure 1. Dr. Brad Erisman (left) and Erin Reed (right) prepare for their first dive in search of spawning groupers. Credit: David Castro.Last month in May, I was fortunate enough to tag along on a scientific dive project at Cabo Pulmo National Park led by PhD candidate Timothy Rowell from the Gulf of California Marine Program (GCMP) at Scripps Institution of Oceanography (SIO) and my advisor Dr. Brad Erisman from the University of Texas at Austin Marine Science Institute (UTMSI). The purpose our travel was to conduct underwater surveys to capture footage of both spawning behavior and sound production of the endangered Gulf Grouper (Mycteroperca jordani) known by many of the locals as “Baya “or “Garropa”. This field trip was part of a larger study to determine the importance of Cabo Pulmo National Park as essential habitat for a spawning stock of Gulf Grouper and to characterize spawning behaviors, spawning seasonality, and patterns of adult movement, habitat use, and distribution in relation to the park. The behavior and ecology of this species is poorly understood, and the results of this study will support current efforts to improve the conservation of this species and the management of its fishery. The project is being conducted in partnership with Cabo Pulmo Divers under the coordination and support of underwater naturalist and dive master David Castro, resource managers of the Comisión Nacional de Áreas Naturales Protegidas (CONANP), and Dr. Mark Steele from California State University Northridge (CSUN). 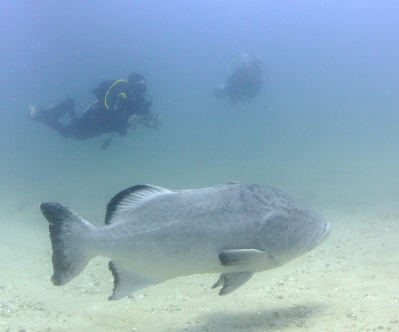 Figure 2. Dr. Brad Erisman (left) attempts to measure the length of a male Gulf Grouper with his laser caliper rig while Erin Reed (right) observes the interaction from a distance. Credit: David Castro.After dropping into the turquoise blue water for the first time (Figure 1), it was clear why Cabo Pulmo is such a special place. Not only is it one of the only known areas to have large numbers of Gulf Grouper in residence, but the reserve also supports an obvious amount of fish life, including several large predatory species of jacks, snappers, and other groupers. Morning dives were devoted primarily to identifying the main locations where male groupers set up their spawning territories, measuring fish with underwater digital calipers (Figure 2), and to the maintenance of passive acoustic equipment (hydrophones) necessary to capture reproductive sounds (Figure 3). The reproductive calls of Gulf Grouper have never been studied before but is likely to reveal important information about the timing and locations of spawning activity for this enigmatic and ecologically important predator that resides inside the Park. Morning dives were also essential for noting Baya behavior and movements during the day to compare to spawning behaviors suspected to occur in the evening. After two morning dives each day, we would head back to the beach for lunch and a few hours of much needed rest to gain the energy necessary to chase fish during evening dives in the hope of catching them in the act of spawning. 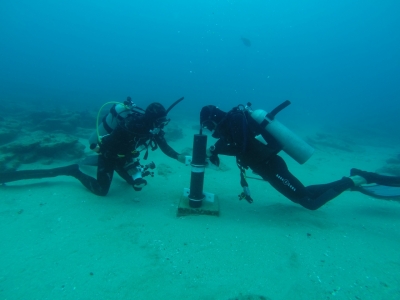 Figure 3. Dive Master David Castro (left) and Project leader Tim Rowell (right) work to finish the redeployment of a hydrophone, an underwater listening device meant to record the sounds produced by male Gulf Grouper during courtship and spawning. Credit: Brad Erisman.My first exposure to behavioral ecology underwater can be summed up as very similar to herding cats: four divers in a small area running around with Go-pro’s and expensive cameras and chasing big fish in order to get that perfect picture or recording. With so much activity going on it can be hard to know where to look (Figure 4)! At first glance, these efforts would probably be very comedic if fish could laugh, but in reality, this activity was necessary to obtain behavioral data essential to the success of the project. In fact, the chaotic chasing of fish during the evening dives (which involved me watching David, Tim, and Brad swimming in all directions after male and female groupers) produced the first footage of Gulf Grouper spawning in the wild! This result alone is a huge success, as it validates Cabo Pulmo National Park as an important spawning habitat for this endangered grouper. The Park is already globally recognized for its ecological health and importance as a successful marine reserve, and these results only serve to strengthen this reputation. 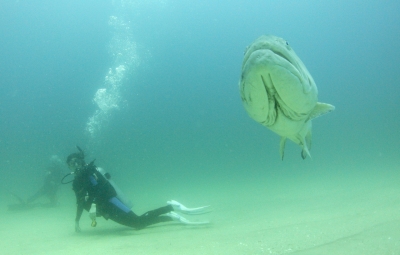 Figure 4. Erin Reed rests on the bottom and observes a large male Gulf Grouper patrolling its territory and circling the dive team. Credit: David Castro.From this first research dive experience, I learned about an area of fisheries research that is just as important as any applied Fisheries technique. The large amount of effort by the researchers involved to obtain quality scientific data was evident, and I feel that the trickle down effects of such research will have broader positive impacts on both the National Park and the whole Gulf of California in terms of marine conservation and fisheries management.

About the Author: Erin Reed is a graduate student at the University of Texas at Austin Marine Science Institute currently working on my M.S. in the Fisheries Ecology Lab under Dr. Brad Erisman. Her thesis topic involves researching linkages between climate, river flow, fish population dynamics, and fisheries production in Upper Gulf of California Fisheries. She received my B.S. in Biology with an emphasis in marine Science from San Diego State University. After graduating from college Erin worked for NOAA Southwest Fisheries Science Center in La Jolla, CA as a fisheries biological technician using primarily life history techniques such as age and growth and reproductive biology to assess coastal pelagic species of fish, mainly Pacific Sardine and Pacific Mackerel, on the West Coast. Her technical background in fisheries science encouraged Erin's long-term interests in fisheries production and population dynamics of commercially important species in both large and small-scale fisheries as these processes are coupled with the environment effects.