Around Campus with Veril Barr

We sat down with Veril Barr to talk about who he is and why he is a jack of all trades. 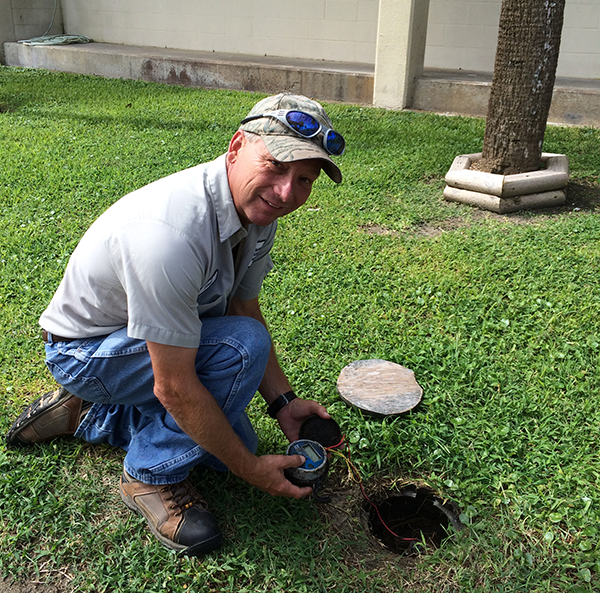 Veril, the Landscape Services Supervisor, shows off one of the many battery operated nodes that helped get the irrigation system up and running when he took over.

Tell me a little bit about yourself.
I moved to Port Aransas from Borger, Texas in 1971. I went to Port Aransas School from second grade through graduation. My son has graduated from Port Aransas and is now freshman at University of Texas San Antonio. My daughter is in the seventh grade. My dad has an electrical and Air Conditioning Company and my background experience fit very well with the position. The position at the University was a good fit for me.

What you do at UTMSI and how long you’ve worked here?
I was hired in July 19, 1985 and I’ve been here for over 30 years. Currently, I am the supervisor of grounds, but when I first started I was a Maintenance Worker 1 - the person that washed and fueled the vehicle fleet, and helped the other trades. I then took over the seawater operations, which supplies filtered seawater to all the laboratories and aquaria. I also became, and continue to be, the certified chemical disposal officer. In 2007, I was promoted to crew leader of maintenance and then in 2009 I became crew leader and grounds supervisor. For the last three years I’ve been the Landscape Services Supervisor which entails maintaining 50 acres of University grounds. As part of my daily activities, I make sure we adhere to a rigid schedule that involves maintaining equipment for the well water system. The water well system irrigates 48 zones with the help of a 10,000 well water reservoir, one 10-horse distribution pump, and 2 7-horse suction pumps. As you can imagine, grounds does a lot of plumbing, digging, and replacing broken water lines. In addition to my duties in the grounds department, I also volunteer for security and my daughter and I have volunteered for Mission-Aransas Reserve education events.

What do you find most rewarding about your job?
I’ve enjoyed working here and think that it is one of the better jobs on the island. It’s rewarding to sit back and look at the properties and see that they look neat, clean, and well taken care of. I’m proud of the work that we do. It’s also great to have good people around you. Being surrounded by good workers is worth its weight in gold.

What is the most interesting or surprising thing you’ve gotten to do at UTMSI?
I was a relief captain on the Research Vessel Longhorn during its second maiden voyage. My shift was midnight to 8 in morning. I’ve been on boats a lot but this time it was pretty hairy. It was a very big vessel (125 feet) and a different world knowing that the crew was relying on you, with their lives in your hands. That particular time, we went through a big rainstorm (thank heavens for radar) – it was thrilling and intense with back deck crane swinging and deploying weather buoys. Another time, Noe Cantu and I took a small vessel under the Harbor Bridge for Dr. Pat Parker, which was 1987 or 1988. It was rough water and we were taking sediment cores. That was a challenge, but we got them. I’ve also enjoyed working with Tony Amos and the Animal Rehabilitation Keep for their turtle releases. His world is really interesting.

What inspires you or makes you get up in the morning?
I have a young family and when I remember the fact that I’m the supervisor and I’m supposed to be here – it helps me get up early and here on time. I feel that I need to lead by example and it feels good to have a purpose and help make the properties look as good as they can.

If you were a marine organisms what would you be and why?
I would be a remora. The bigger fish does all the work while you hang on for your life and go along for the ride. You would never know where you’re going to end up and it would be a new adventure every day.

Veril Barr is the Landscape Services Supervisor at The University of Texas Marine Science Institute. He’s been working at the University since 1985 and was born in Borger, Texas in the panhandle. He moved to Port Aransas, Texas during second grade and has been here ever since. Veril has worked at UTMSI for over 30 years, including the time when The Lazarette Gazette was still in press. Can you find Veril?