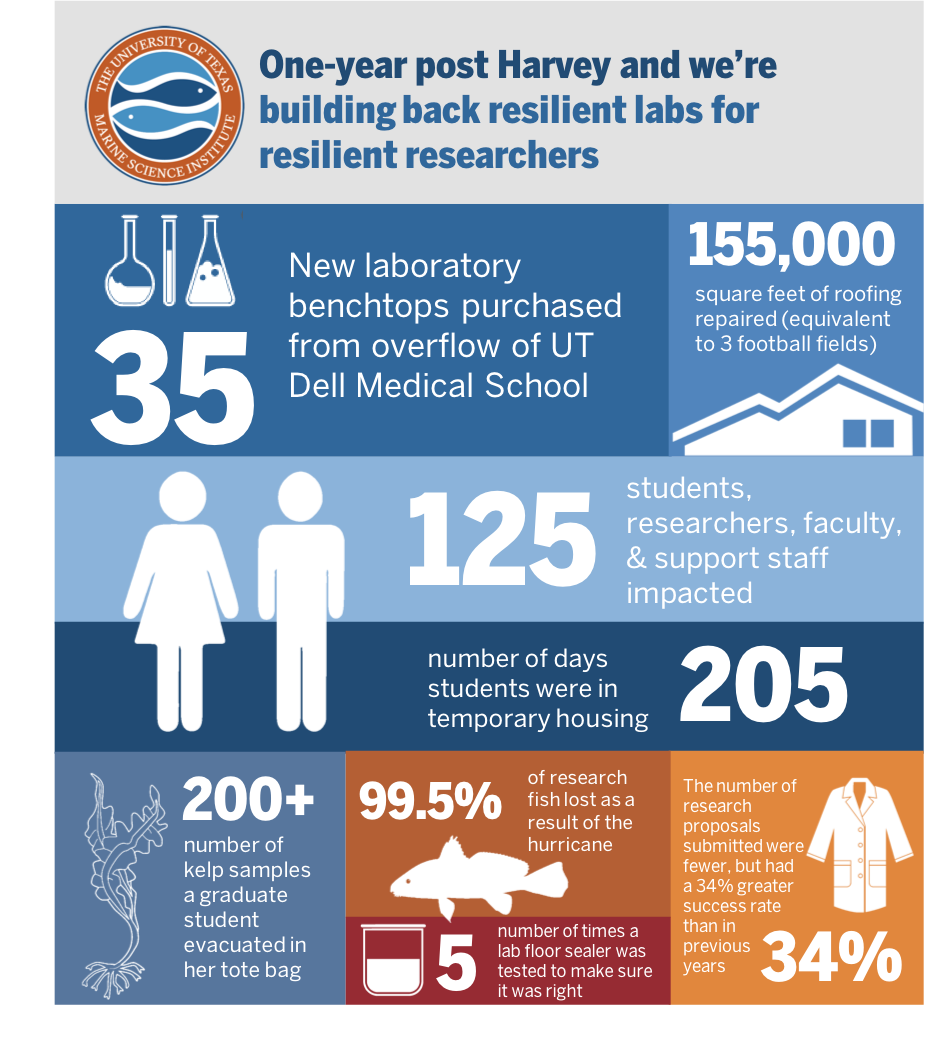 A tight knit group of 125 dedicated scientists and staff at The University of Texas’s Marine Science Institute sat in awe around the weather channel one year ago when the small coastal town of Port Aransas was devastated as Harvey, a category four hurricane, made landfall. Its 130-mile plus winds battered the research institute that is wedged at the convergence of the Port Aransas Ship Channel and Port Aransas’s northern beach. This facility is the largest employer in Port Aransas, but its 74 buildings were reduced to 68 when six were completely obliterated by the storm. The majority of the damage to the buildings were a result of wind damage and rain infiltration. One of those buildings damaged was its warehouse, whose insulated roof filled with putrid water that formed drooping bladders just waiting to pop. While the warehouse took a beating, it successfully protected the majority of the institute’s small boat fleet which survived the storm mostly unscathed.

The location of the Marine Science Institute may seem precarious, sitting in the path of future storms, but it is also the ideal location to conduct science on oceans and coasts. Seawater from the ship channel is pumped into the laboratories (with a temporary skid pump post-storm). The seawater supports a large number of research projects at the Institute including some on a seemingly insignificant fish called a croaker. The croaker has been a key component to the discovery of a novel membrane receptor found on ovarian cells that is proving to be important in human cancer treatments. To support ground-breaking discoveries such as these, the University is rebuilding the Institute to make it more resilient to future storms.

One year later, the Institute is 40% repaired. There are 60% of the offices back and occupied. One of the two large laboratory buildings are poised to become operational in the next month or two. The University is implementing lessons learned and rebuilding with more resilient materials such as sealed concrete instead of tile, mobile lab benches instead of stationary, and Texas Department of Insurance compliant roofs and windows instead of flat roofs with small stones. Those stones or aggregate became ballistic missiles during Harvey and created bullet-sized holes in many, many windows.

Not only are the laboratories being built back stronger and more resilient, but they’re being built for the resilient scientists and students that call them home. “After the evacuation, I moved no less than seven times before my apartment was repaired,” recalled graduate student Christina Bonsell. Despite the upheaval in their personal lives, institute scientists took to the water just weeks after the storm to collect samples and measurements. They also took advantage of time without their labs to write proposals and manuscripts. One such chemist, associate professor Dr. Zhanfei Liu worked at a Starbucks to submit proposals because his home had been flooded by ten inches of water and WIFI was non-existent. “The caffeine helped too,” he remembered with a smile.

As the rebuild continues, the scientists are looking forward to getting back into their own labs and bringing instruments back online. The university is also looking at the silver lining and looking forward to the opportunities to make the labs and buildings more efficient, modern and resilient. “All great things come with determination and great effort. The Marine Science campus will be rebuilt for the future, stronger and smarter. We look forward to providing facilities that will support our hardworking faculty and students for generations to come” said Marine Science Institute Director Dr. Robert Dickey.