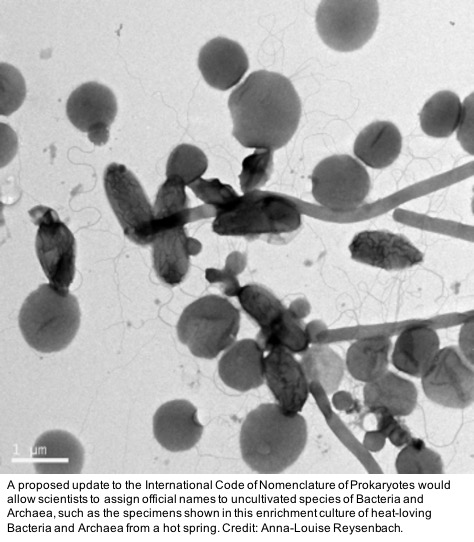 The long-standing rules for assigning scientific names to bacteria and archaea are overdue for an update, according to a new consensus statement backed by 119 microbiologists from around the globe.

Bacteria and archaea (single-celled organisms that lack cell nuclei) make up two of the three domains of life on Earth, and are named according to the International Code of Nomenclature of Prokaryotes (ICNP; the Code). At present, the Code only recognizes species that can be grown from cultures in laboratories – a requirement that has long been problematic for microbiologists who study bacteria and archaea in the wild.

Since the 1980s, microbiologists have used genetic sequencing techniques to sample and study DNA of microorganisms directly from the environment, across diverse habitats ranging from Earth’s icy oceans to deep underground mines to the surface of human skin. For a vast majority of these species, no method yet exists for cultivating them in a laboratory, and thus, according to the Code, they cannot be officially named.

“There has been a surge in recent years in genome-based discoveries for archaea and bacteria collected from the environment, but no system in place to formally name them, which is creating a lot of chaos and confusion in the field,” said Alison Murray, Research Professor of Biology at the Desert Research Institute in Reno. “Being able to represent the diversity of uncultivated organisms known by their genome sequences in a common language is incredibly important.”

In an article published today in the journal Nature Microbiology, Murray and her coauthors, including Dr. Brett Baker, assistant professor at The University of Texas at Austin’s Marine Science Institute, present the rationale for updating the existing regulations for naming new species of bacteria and archaea, and propose two possible paths forward.

As a first option, the group proposes formally revising the Code to include uncultivated bacteria and archaea represented by DNA sequence information, in place of the live culture samples that are currently required. As an alternative, they propose creating an entirely separate naming system for uncultivated organisms that could be merged with the Code at some point in the future.

“The old conventions of naming are outdated and need to be updated to account for the rapid rates of discovery using genomics,” said Dr. Brett Baker. “We are just at the beginning of discovering many new species and using either of the proposed systems will provide a universal standard as new species are added to the Tree of Life.”

For example, researchers who use DNA sequencing to study the human microbiome – the thousands of species of Bacteria and Archaea that that live inside and on the human body – would have a means of assigning formal names to the species they identify that are not yet represented in culture collections. This would improve the ability for researchers around the world to conduct collaborative studies on topics such as connections between diet and gut bacteria in different human populations, or to build off of previous research.

The article and proposed plans are the culmination of a series of workshops that were funded by the National Science Foundation. The next step, says Murray, is to figure out an implementation strategy for moving forward with one of the two proposed plans, while engaging the many microbiologists who contributed to this consensus statement and others around the world who want to help see this change enacted. So far, many have been eager to participate.

“This is an exciting field to be in right now because we’re describing diversity of life on Earth and uncovering new phyla just like scientists were back in the 1800s when they were still discovering larger organisms,” Murray said. “Lots of paradigms have been changing in how we understand the way the world works, and how much diversity is out there – and this is another change that needs to be made. We’re going to need to change it or we’re going to live in chaos.”

The field of microbiology seems to move at a lightening pace. Trying to keep pace with that speed, while this article was in revision, there was a vote from the International Code of Nomenclature of Prokaryotes to reject the proposal to formally revising the Code to include uncultivated bacteria and archaea represented by DNA sequence information. This means that a entirely separate naming system for uncultivated organisms will likely be created that could be merged with the Code at some point in the future.