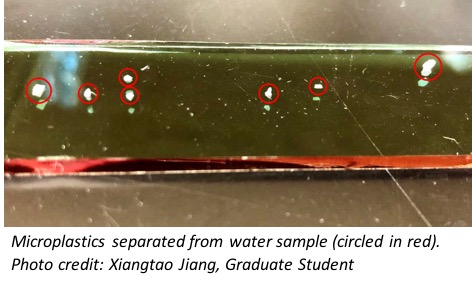 Where does plastic in the ocean go? Marine chemist Dr. Zhanfei Liu, Professor at the University of Texas Marine Science Institute seeks to provide the answer. In an announcement today, by the National Science Foundation, Liu was one of the researchers awarded an EAGER award to discover the ultimate fate of plastic debris in the deep ocean. An estimated 5 to 13 million metric tons of plastic flows from the land and enters the ocean each year. However, models indicate that 99% or more of the plastic entering the ocean is unaccounted for. “The goal of our project is to understand the physical and chemical changes of plastics caused by microbes in deep ocean,” said Liu.

Liu and collaborators will deploy incubators in deep ocean waters to evaluate how plastic degrades without degrading powers of sunlight. The team hypothesizes that microbial communities play a big role in how and where the plastic goes. The researchers will also determine if the chemical makeup of plastics plays a role in degradation and if microbes are able to break down plastic to its basic carbon form and use that carbon to create energy.

“We are very excited to learn if microbial communities living in the no-light zone of the ocean can actively degrade and use the synthetic carbon that make up plastics,” said Liu. This bold idea could be transformative and provide much needed insight into the removal of global plastics.