Like cracking a code of hieroglyphics, chemists decipher the previously secret structure of matter 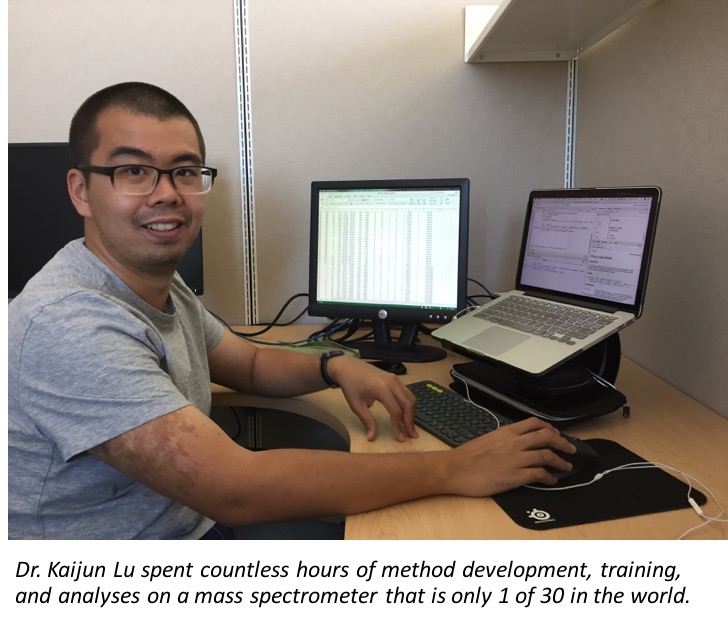 Several thousands of years ago, when the pharaohs ruled ancient Egypt, organic matter in the oceans like seagrass and by products of fish waste created during their time is just now breaking down and transferred back into the atmosphere.

Dissolved organic matter is one of the most stable sources of carbon there is and it can take several thousands of years to breakdown. Chemists at The University of Texas Marine Science Institute recently made a ground-breaking discovery about the shape and structure of this ancient type of carbon. In a paper published in the journal Environmental Science and Technology, Drs. Kaijun Lu, Wayne Gardner, and Zhanfei Liu produced the first record of what the dissolved organic matter looks and feels like.

After peering at numerous samples all the while looking at the shape of the molecules, bonds of its atoms, and its weight, the chemists discovered that dissolved organic matter starts out as a large molecule that becomes compact as it is eaten and purged by bacteria. “The most surprising finding was that there are only a few different forms, or isomers, much less than previously thought. Our data strongly suggest that the formation of dissolved organic matter is not random” said chemist Zhanfei Lu.

This broke the recently re-ignited ‘dilution hypothesis’ which states that dissolved organic matter can last for thousands of years because the ocean is so vast it dilutes that matter and bacteria couldn’t possibly find and degrade all of the types of isomers out there. “We’ve opened up a new door. The next steps are to figure out why dissolved organic matter sticks around for so long when they’re surrounded by hungry bacteria,” said lead author Kaijun Lu.

“It’s a small step forward in refining what we know about the massive carbon cycle, but this step drastically changes the way we calculate how much carbon is circling throughout the globe,” said Liu. This research was supported by the National Oceanic and Atmospheric Administration and Texas Sea Grant.