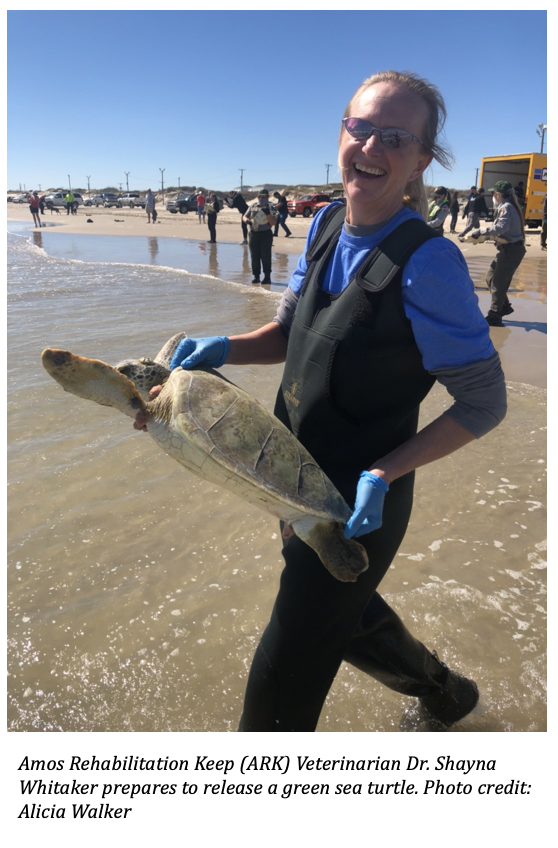 The recent cold weather event was not nearly as severe as the winter storm of 2021, but the cold temperatures still caused many sea turtles to become stunned. The Amos Rehabilitation Keep (ARK) at The University of Texas Marine Science Institute received 114 green sea turtles from the weather front last weekend, the majority of which were rescued from the Laguna Madre. Yesterday, the ARK released 106 of those turtles near Bob Hall Pier in Corpus Christi, Texas. The remaining turtles require more rehabilitation and the ARK hopes to release them later this year.

Sea turtles are cold‐blooded reptiles and require a warm temperature to stay alive. When the water dips below 45 degrees Fahrenheit, turtles start to get in trouble and can have decreased heart rate, circulation, and exhibit lethargy followed by shock, pneumonia, and possible death. This past Friday, the waters of the Laguna Madre dipped to almost 40 degrees Fahrenheit and stayed under the 45-degree threshold for over 24-hours. The Gulf of Mexico water has been getting warmer over the years, which is usually good news for sea turtles because they don’t have to migrate and can stay here year‐round to feed on abundant algae and invertebrates found on the Packery and Port Aransas jetties. This however is a double‐edged sword, turtles can also be trapped when the temperature drops, leaving them stunned by the cold and risking death.

The ARK along with the Padre Island NS Division of Sea Turtle Science & Recovery, Texas Parks and Wildlife Department, SeaWorld, Texas State Aquarium, Texas Sealife Center, Mission-Aransas Reserve, and many volunteers braving the cold weather have been essential in saving many of these endangered sea turtles. Temperature data and forecasting during this cold stun event were provided by Texas A&M University-Corpus Christi Conrad Blucher Institute.