Beware of the Dead Zone; it’s sucking the oxygen out of the ocean 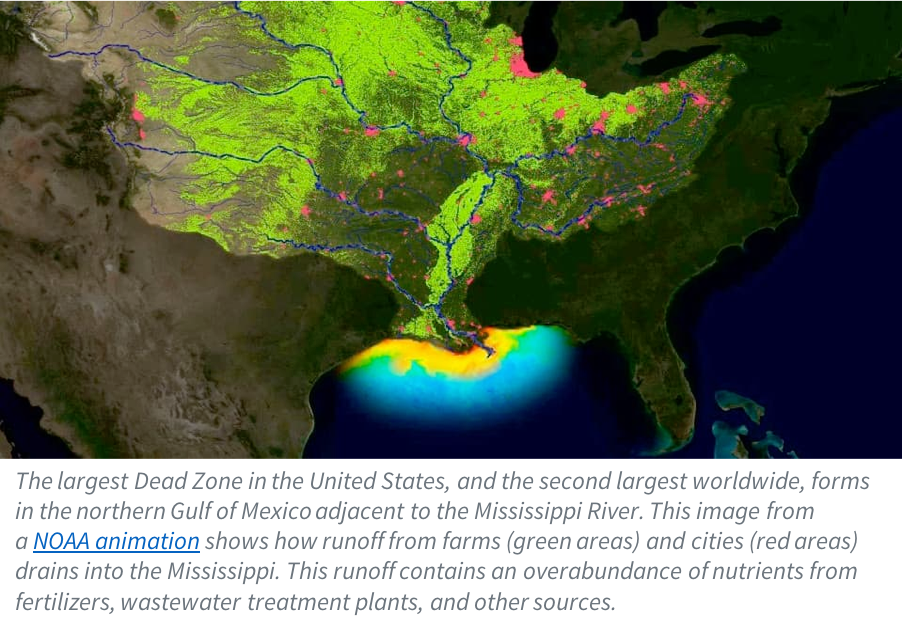 Deep beneath the waves of northern Gulf of Mexico is an area so dark and devoid of oxygen that few creatures can survive. It’s the Dead Zone and every summer it grows to cover on average of over 5,000 square miles – that’s larger than the state of Connecticut. Similar to Stephen King’s horror novel The Langoliers, something in the Dead Zone is consuming everything in its path. In the Dead Zone, it’s not a large ball of teeth like in the novel; instead it is seemingly harmless organic matter that is consuming dissolved oxygen. The lack of oxygen causes any animal that can swim, like fish and shrimp, to flee while worms and clams that are stuck in the mud often suffocate and perish. Dr. Zhanfei Liu, a marine chemist at the University of Texas Marine Science Institute, is trying to crack the code of the Dead Zone and understand how it forms.

The Dead Zone in the Northern Gulf of Mexico occurs off the coast of Louisiana where the Mississippi River Basin drains the largest watershed in the United States (41% of the land area, ranging as far west as Idaho, north to Canada, and east into New York State). Nutrients coming from the Mississippi River Basin fuel large blooms of phytoplankton which, when they die a natural death and settle into bottom waters, turn into organic matter that require oxygen to decompose. There is so much organic matter from phytoplankton blooms that the decomposition of it sucks out all or most of the available oxygen at depth. 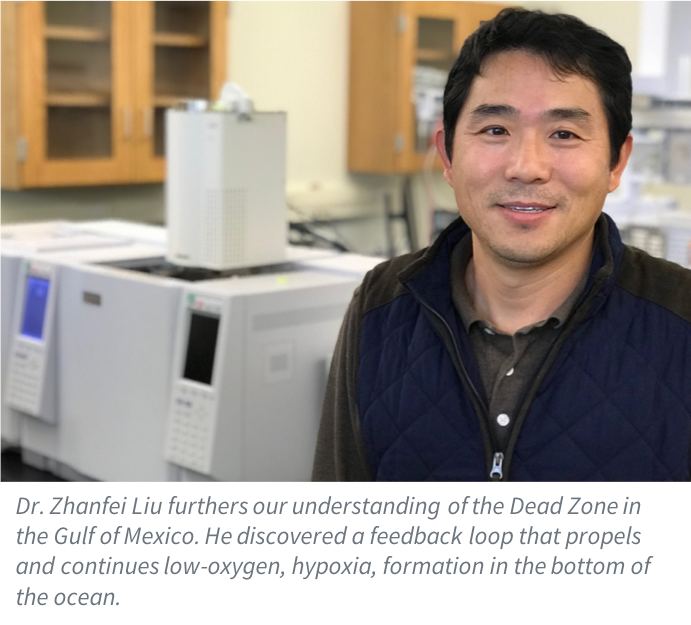 Much research effort has focused on monitoring the size and timing of the Dead Zone, but less is known about the mechanisms for its formation. Organic matter decomposition not only leads to oxygen consumption, but it is also coupled to nutrient regeneration and element cycles. Dr. Zhanfei Liu has discovered that peptides, the bonds that hold molecules together, decompose much faster in low-oxygen water of the Dead Zone than surface waters with plenty of oxygen. This is due to high concentrations of phosphate in low-oxygen bottom water that promotes the growth of microorganisms. A vicious feedback loop gets created because the ‘new’ microorganisms die and decompose, which then consumes more oxygen and releases more phosphate - starting the cycle all over again. This cycle continues and grows the Dead Zone until fall and winter, when the nutrient inputs decrease and the water is naturally more mixed, which moves oxygen-laden surface water with the low-oxygen bottom waters.

As regions of marine waters with low oxygen levels are projected to expand and occur in shallower waters with increasing global warming and nutrient inputs, there is a critical need to decipher mechanisms of Dead Zone formation. We may never know why the Langoliers spread and consumed everything in their wake, but scientist like Liu are coming closer to understanding the why the Dead Zone consumes dissolved oxygen and decomposes peptides in its wake.

This research was supported by a grant from the National Science Foundation Chemical Oceanography Program.