Dispatches from the Gulf 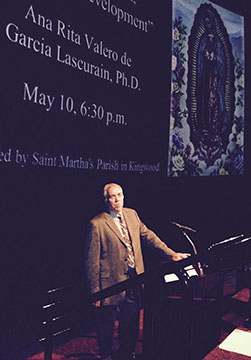 Dr. Ed Buskey, UTMSI professor and lead scientist for one of the research projects featured in the film "Dispatches From The Gulf," participated in a special screening in Houston this week. Courtesy photo.The 2010 Deepwater Horizon oil spill occurred 1,500 meters deep in the Gulf of Mexico, releasing approximately 3.19 million barrels of oil. The event initiated an unprecedented response effort and mobilized the largest, coordinated scientific research endeavor around an ocean-related event in history-orchestrated through the Gulf of Mexico Research Initiative (GoMRI). The GoMRI scientists and their research to improve society’s ability to understand, respond to, and mitigate the impacts of petroleum pollution and related stressors of the marine and coastal ecosystems is documented in Dispatches from the Gulf by Screenscope Films. It premiered as an episode of the award-winning Journey to Planet Earth series.
________________________________________
Dispatches from the Gulf (Complete Documentary)

You can watch excerpts of this film with some of the featured scientists at our public lecture this Thursday, February 18, 2016!

This project was supported by the Gulf of Mexico Research Initiative, the Wallace Genetic Foundation and the Farvue Foundation.