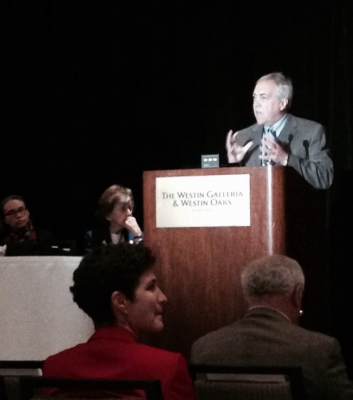 UTMSI’s Dr. Ed Buskey presents “What happens to oil at very small scales and its effects on bacteria and zooplankton” during a special plenary session with results from the Dispersion Research on Oil: Physics and Plankton Studies (DROPPS) consortium. This work was recently refunded and will continue the consortium’s research on the impact of oil spills and dispersants on the Gulf of Mexico.

The UTMSI-led consortium brings together experts from seven institutions and disciplines, including marine biology, chemistry, physics, computational modeling, imaging and healthcare professions. The previous work of the consortium made outstanding progress in understanding how dispersants affect the breakup of oil by turbulence, surface waves and other physical forces. For example, the team found that dispersant treated oil results in the formation of tiny droplets of crude oil in the same size range as the food of marine zooplankton. Researchers confirmed that these tiny oil droplets are readily consumed and toxic compounds in the oil are accumulated in the bodies of these tiny animals, which are then passed up the food chain to larger organisms.

The newly funded project will continue the scientist’s efforts to model the processes affecting the fate of crude oil spills, including physical breakup and dispersion of oil patches, interactions of petroleum with plankton and microbes, biodegradation of oil and the impact of aerosolized oil on public health. Dr. Buskey directs the consortium and is assisted by UTMSI scientists—Drs. Zhanfei Liu, Brad Gemmell and Deana Erdner.  Other consortium members include scientists at Johns Hopkins University, University of Pennsylvania, New Jersey Institute of Technology, Texas Tech University, University of Wisconsin at Milwaukee, SINTEF – Norway and Bloomberg School of Public Health – JHU.
PRINT