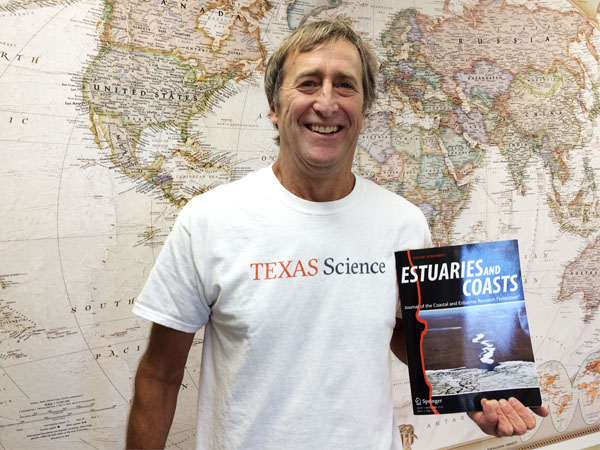 Dr. Ken Dunton with the new print of the Estuaries and Coasts journal that was released this month. Credit: Sally Palmer, UTMSI.Dr. Ken Dunton’s photograph of Arctic estuaries is featured on the cover of this year’s journal of Estuaries and Coasts. Dr. Ken Dunton has been conducting research in the Arctic for nearly four decades with a focus on productivity and food webs. He is interested in how Arctic estuarine and coastal systems are responding to warming and rapid ice retreat. He and Dr. Jim McClelland have collaborated over the past five years on a National Science Foundation funded study that examined the unique chemical and biological processes that take place in Arctic lagoons during the eight month period of ice cover, spring break-up, and the summer open-water period. The photograph was taken during one of their flights along the eastern Beaufort Sea coast to identify locations for an airborne assisted deployment of a small boat and sampling gear. Their sampling efforts have resulted in the publication of several papers that describe the very unique dynamics of these ice-dominated estuaries. 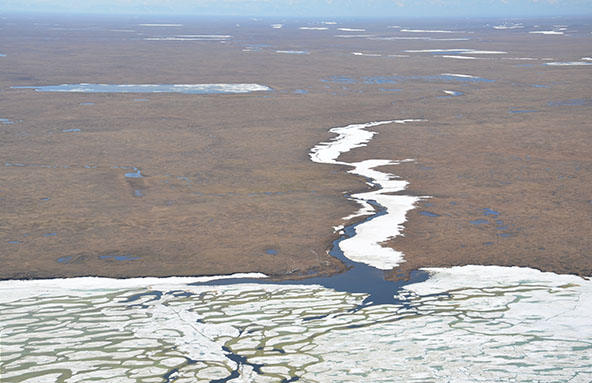 Cover Photo: Break-up linked estuarine and lagoon system on Arctic coasts is a dynamic event, as captured in this aerial image taken on June 20, 2013. With the Brooks Range on the horizon, freshwater has begun to thread its way down the Pokok River, pushing broken Ice from the shoreline of Pokok lagoon as it mixes with ice melt waters and the marine waters of the Polar Mixed Layer. Pokok Lagoon is connected on the west to Oruktalik Lagoon, about 35 km east of Barter Island in the eastern Alaskan Beaufort Sea (70o 2.75’N; 142o 45.3’W). Credit: Ken Dunton, UTMSI.