Dr. Joan Holt may have retired from research and teaching, but she sure hasn’t slowed down. In March, the professor emerita and her co-editors, Drs. Calado, Olivotto, and Oliver, saw the fruits of their labor come to pass when their book Marine Ornamental Species Aquaculture became available for purchase. 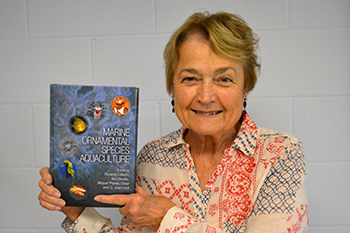 Dr. Joan Holt holds her new book, Marine Ornamental Species Aquaculture, released last month. This is the second book that she has edited. Her first book, Larval Fish Nutrition, was released in 2011.This book collects into a single work the most up-to-date information currently available on the aquaculture of marine ornamental species. It includes the contributions of more than 50 leading scientists and experts on different topics relevant for the aquaculture of the most emblematic groups of organisms traded for reef aquariums. From clownfish, to angelfish, tangs and seahorses, as well as corals, anemones, shrimps, giant clams and several other reef organisms, all issues related with the husbandry, breeding, and trade are addressed, with explanatory schemes and illustrations being used to help in understanding the most complex topics addressed.

The global trade of aquatic organisms for home and public aquariums, along with associated equipment and accessories, has become a multi-billion dollar industry. Aquaculture of marine ornamental species, still in its infancy, is recognized as a viable alternative to wild collection as it can supplement or replace the supply of wild caught specimens and potentially help recover natural populations through restocking.

Marine Ornamental Species Aquaculture is a key reference for scientists and academics in research institutes and universities, public and private aquaria, as well as for hobbyists. Entrepreneurs will also find this book an important resource, as the culture of marine ornamental species is analyzed from a business oriented perspective, highlighting the risks and opportunities of commercial scale aquaculture of marine ornamentals.