Professor Emerita, Dr. Joan Holt, was honored with the President’s Award at the 15th Annual Conservation & Environmental Stewardship Awards Banquet hosted by the Coastal Bend Bays Foundation. Each year the Foundation recognizes individuals and organizations that have made important contributions to conservation of the environments in the Coastal Bend.

The President’s Award is given to individuals that have made significant contributions to the education and or protection of Coastal Bend natural resources, habitats and native species. “Dr. Joan Holt has been a stalwart supporter and practitioner of conservation efforts in the Coastal Bend. Her work is an inspiration to all of us and we are pleased to honor her with this year’s President Award,” said Jace Tunnell, president of the Coastal Bend Bays Foundation.

Dr. Holt will add this accolade to many others, including but not limited to, a Lifetime Achievement Award by YWCA, and the Harvey Weil Professional Conservationist of the Year award. However, there is no better recognition that the conservation successes that Dr. Holt has spearheaded. From a career in conservation fisheries, to local birding habitat restoration projects, Joan’s efforts are widespread and impactful.

Over her tenure of 35 years at The University of Texas Marine Science Institute, Dr. Holt’s work has addressed vital issues surrounding fish ecology, captive culture, and development. Her research has provided a model for understanding the role of early life history in maintaining healthy fish populations. She has been part of ground-breaking research, including the captive spawning and rearing of red drum, cobia or ling, and southern flounder. Her early research established the optimal requirements for rearing red drum larvae to the juvenile stage; methods that are now used for stock enhancement and aquaculture production worldwide.

She has also worked to enhance birding in Port Aransas and trained local public-school students in birdwatching and for competition in the Great Texas Birding Classic. She has served for over 20 years on the Organizing Committee for “A Celebration of Whooping Cranes and Other Birds” for The Port Aransas Chamber of Commerce and Tourist Bureau and has been a Co-compiler of the Port Aransas Christmas Bird Count for 28 years.

Dr. Holt is also active in public policy. She was Director of Nueces County Water Control and Improvement District for 12 years, and after retiring from The University of Texas, became a Port Aransas City Council member in 2016. Since the recent hurricane, Joan has been working with the city of Port Aransas and is focusing her energies to rebuild the Port Aransas Nature Preserves and ensuring that rebuilding of city infrastructure to make it more sustainable and resilient. This is just one more of the many examples in which Dr. Holt is making significant contributions to the education and or protection of Coastal Bend natural resources, habitats and native species. 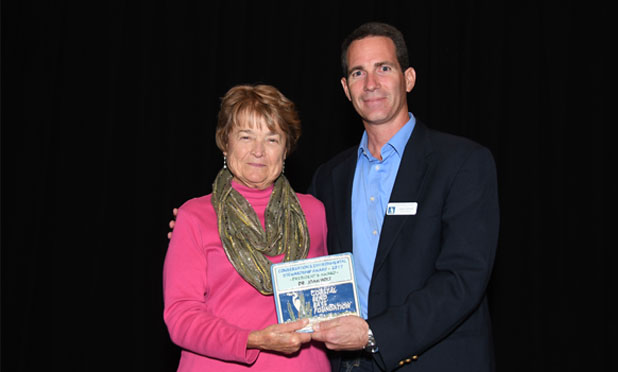