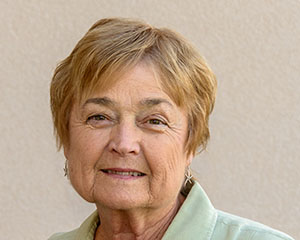 Dr. Joan Holt was selected to receive the Professional Conservationist of the Year award for her passion and conviction to personal conservation efforts, and making that endeavor her life’s work. G. Joan Holt is Professor Emerita of Marine Science at the University of Texas Marine Science Institute in Port Aransas. She received her BS and MA in Biology from the University of Texas at Arlington, and Ph.D. in Wildlife and Fisheries from Texas A&M University- College Station. She was with UTMSI for over 35 years as a researcher, teacher and administrator. Holt was Interim Director of UTMSI 2012-2013, Associate Chair of Marine Science 2011-2012 and Director of the UTMSI Fisheries and Mariculture Laboratory for 10 years holding the Perry R. Bass Chair in Fisheries and Mariculture.

Dr. Holt’s work has addressed vital issues surrounding fish ecology, captive culture, and development. Her research has provided a model for understanding the role of early life history in maintaining healthy fish populations. She has been part of ground-breaking research, including the captive spawning and rearing of red drum, cobia or ling, and Southern flounder. Her early research established the optimal requirements for rearing red drum larvae to the juvenile stage; methods that are now used for stock enhancement and aquaculture production worldwide.

Her lab was one of the few in the country to grow coral reef fishes in captivity to conserve native populations. Dr. Holt and her students spawned and raised a number of ornamental fish and shrimp popular in the aquarium trade. Significant results from her coral reef fish research forms the basis for a new book to be published by Wiley- Blackwell on Marine Ornamental Aquaculture. She will be co- editor of that publication due out in early 2017.

Dr. Holt’s research has resulted in over 140 publications and training for 34 graduate students and post docs. She has lectured around the world (Australia, China, Portugal, Japan, Uruguay, Norway, and Belgium) addressing vital issues on fish ecology, captive culture, and larval development. Her research has been featured on the Discovery Channel, ABC News, Lago in the Morning Radio Show, Texas Parks and Wildlife Magazine, Tide Magazine and in the Corpus Christi Caller Times, the Houston Chronicle and San Antonio Express.

She has worked to enhance birding in Port Aransas and trained local public school students in birdwatching and for competition in the Great Texas Birding Classic. She has served for 20 years on the Organizing Committee for “A Celebration of Whooping Cranes and Other Birds” for The Port Aransas Chamber of Commerce and Tourist Bureau and has been a Co-compiler of the Port Aransas Christmas Bird Count for 27 years. Dr. Holt was Director of Nueces County Water Control and Improvement District for 12 years, and Port Aransas City Council member since May 2016.

Throughout her research career and community involvement, Dr. Joan Holt has been a model for the conservation of our South Texas environments. The Rotary Club of Corpus Christi will honor Dr. Holt with the Harvey Weil Professional Conservationist of the Year award at an awards dinner on Saturday March 18, 2017.