How Jellyfish Break Down Oil After a Spill 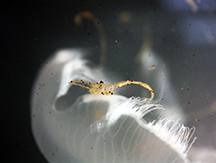 Jellyfish produce mucus, especially when stressed, which can interact with oil and break it down. This moon jellyfish is sloughing off mucus that has mixed with droplets of oil. Credit: Brad Gemmell.Jellyfish aren't the passive creatures you think they are. While they appear to simply drift through the ocean, letting the currents take them where they may, they can also swim up and down in the water column. With weak muscles, they squeeze their bells to eject trapped water, which propels them forward. When they unclench those muscles, the bells refill with water and give them a second boost. It's a slow way to travel, but uses little energy, making jellyfish the most energy-efficient swimmers in the sea.

The tiny movements from the jellies produce small underwater waves and currents that can move quite large volumes of water. It's possible that the small turbulence created by jellyfish (and other animals) could be enough to break down oil after a spill.

Brad Gemmell researches physical processes that can break down oil, including jellyfish and their locomotion, at The University of Texas at Austin, Marine Science Institute. In response to the Deepwater Horizon oil spill in the Gulf of Mexico in 2010, he teamed up with other researchers to form the DROPPS group, which stands for Dispersion Research on Oil: Physics and Plankton Studies. The goal is to better understand how oil breaks up, how different organisms interact with oil, and what role gelatinous zooplankton (or what most of us call "jellyfish and comb jellies") play in oil breakdown.

Two million gallons of dispersants were added to the slick to help break down the oil. But they can't do that work alone. Chemical dispersants require movement to properly react and break oil down into tiny droplets. Waves at and below the surface and currents can do this work, slowly mixing the dispersant into the oil like mixing vinegar with olive oil. Plankton and jellyfish water cycling could aid in this mixing process—and under the right circumstances, they could make the use of dispersants unnecessary. 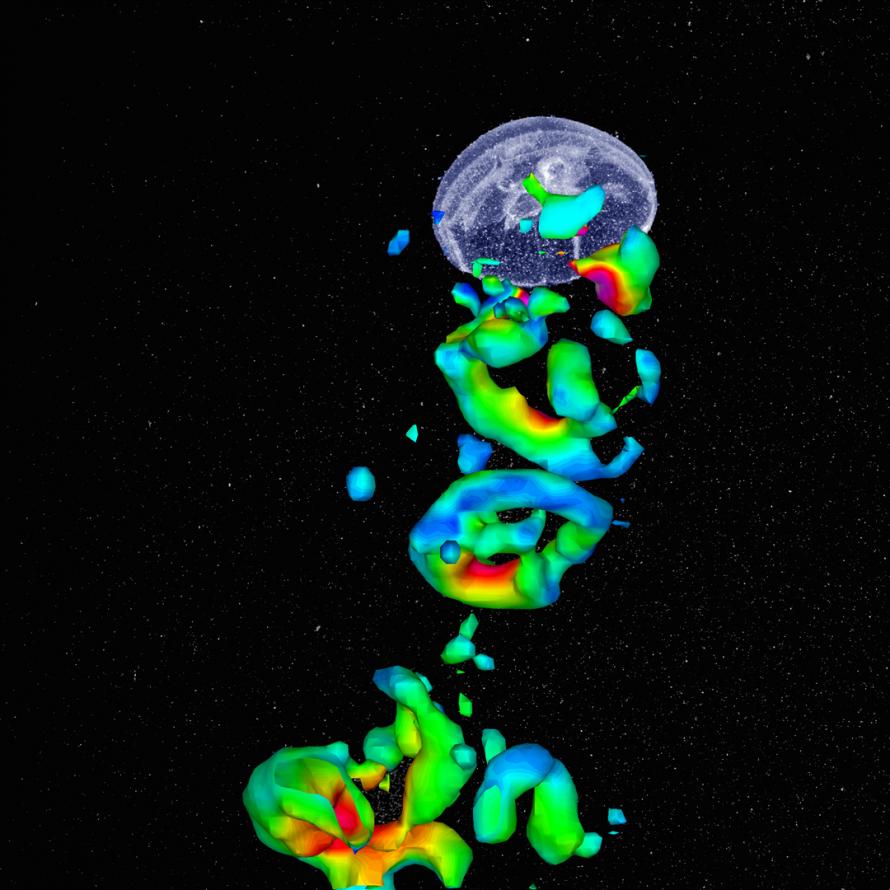 A PIV image of a moon jelly and its wake. Credit: Brad Gemmell.Gemmell and his DROPPS colleagues use a technique called Particle Image Velocimetry (PIV) to measure just how much jellyfish move and how much oil the plankton can disperse. A bright laser illuminates water in a tank that also contains small, hollow glass beads floating throughout. Together, these tools allow the researchers to precisely measure the movement of water as jellies swim in the tank (the moon jellyfish—Aurelia aurita—in their experiment). They record the movement—taking thousands of high-resolution images in just a second—to see exactly what interactions are happening between the animal and the glass beads and then apply that data at larger scales in places like the Gulf of Mexico. A larger, 3.5 meter-tall tank allows a closer look at all the components together to assess how water movement from the plankton impacts oil movement. (You can see a PIV image of a moon jelly and its wake in the image to the right.)

Mucus and a Missing Link

Jellyfish could also help break down oil when they are stressed out—as they would be when they encounter oil from a spill. When humans are under stress, our muscles tense, our palms sweat, and our hearts race. Jellyfish produce mucus, even more when they are stressed. A second part of the DROPPS experiment involves looking at how oil breaks down when this mucus is present.

It may sound gross, but mucus contributes hugely to ocean food webs. Along with jellyfish, corals produce mucus for protection, larvaceans live in mucus “homes,” and parrotfish sleep in mucus nests, among others. The energy and nutrient-rich mucus cycles through the ocean and often ends up on the seafloor, where it feeds communities of bacteria and other creatures. Dead floating material sticks to the mucus, and larger clumps quickly drop to the deep-sea floor as mucus blobs or marine snow.

In the water column, this mucus can provide necessary fuel and nutrients for phytoplankton to produce energy and bacteria to grow—such as the bacteria that break down oil after a spill. Oil-consuming bacteria are frequently limited by the amount of nitrogen in the water, as they likely were during Deepwater Horizon. "The offshore Gulf is a blue water system, where the nutrients that fuel microbial growth are sparse and fiercely competed for," said microbial ecologist Mandy Joye from the University of Georgia in an interview with the Ocean Conservancy. "Oil- and gas-oxidizing bacteria require nutrients to build biomass and increase metabolic rates. Nutrient availability may well have limited the degradation of Deepwater Horizon oil and gas significantly.”

Nitrogen, a major limiting component in the ocean nutrient system, is found in jellyfish mucus. Jellyfish could therefore help important oil-consuming bacteria grow during an oil spill. Gemmell explains, “Mucus of most cnidarians (including jellyfish) has plenty of nitrogen, so it is a haven for bacteria which can grow and reproduce very quickly when mucus is available. Nitrogen is also usually the limiting factor in how fast oil-degrading bacteria can consume the oil (a source of carbon for the bacteria).” Increased mucus from stressed-out jellies could mean more nitrogen and bacteria. And additional oil-consuming bacteria means that oil gets broken down more quickly. The DROPPS team is still working to answer these questions of how much and how quickly oil might break down in the presence of jellies and their mucus.

Water perturbation and mucus production from jellyfish won’t clean up oil or stop it from reaching shorelines after a spill. And jellyfish certainly aren’t immune to oil. (Another study found the adults of some species are tolerant of oil, while others are not.) But understanding how organisms affect oil movement and breakdown presents a more complete picture of what happens in ocean ecosystems during an oil spill. Ocean animals may just be our allies in oil spill recovery.

The DROPPS group is funded by the Gulf of Mexico Research Initiative (GoMRI). The Gulf of Mexico Research Initiative (GoMRI) is a 10-year independent research program established to study the effect, and the potential associated impact, of hydrocarbon releases on the environment and public health, as well as to develop improved spill mitigation, oil detection, characterization and remediation technologies. For more information, visit http://gulfresearchinitiative.org/.

This story was written and contributed by Emily Frost with The Ocean Portal. The Ocean Portal is part of the Smithsonian Institution’s Ocean Initiative to increase the public’s understanding and stewardship of the Ocean.”