Hundreds of Sea Turtles Get a New Lease on Life 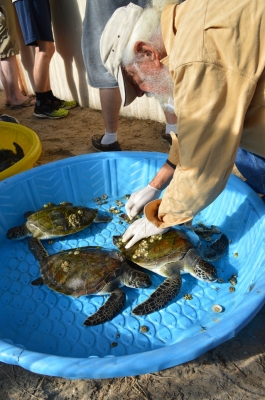 PORT ARANSAS, TX – Over 200 sea turtles were released back into the wild this afternoon with the help of many volunteers and several agencies. The Animal Rehabilitation Keep at the University of Texas Marine Science Institute housed and recuperated over 140 sea turtles that were affected by the recent cold weather. Sea turtles are cold-blooded reptiles and require warm temperature to stay alive. When the water dips below 60 degrees Fahrenheit, turtles start to get in trouble and can have decreased heart rate, circulation, and exhibit lethargy followed by shock, pneumonia and possible death. Water temperature that reaches 50 degrees Fahrenheit are almost always fatal. The Gulf of Mexico water has been getting warmer over the years, which is usually good news for green sea turtles because they don’t have to migrate and can stay here year-round to feed on abundant algae and invertebrates found on the Packery and Port Aransas jetties. This however is a double-edged sword, turtles can also be trapped when the temperature drops, leaving them stunned by the cold and risking death.

With the help of 50 plus volunteers, the Animal Rehabilitation Keep loaded all of the sea turtles that were ready for release at University of Texas Marine Science Institute in Port Aransas. Then a convoy of turtles and volunteers of over twenty-five vehicles made the trip down to the Padre Island National Seashore, where the sea turtles had their own runway to the ocean roped off from the public. A large crowd greeted the turtles to wish them well on their journey and new lease on life. Today’s turtle release was made possible from staff and volunteer support from the Animal Rehabilitation Keep at the University of Texas Marine Science Institute and the Padre Island National Seashore.