Seagrasses are some of the earth’s most productive habitats producing a significant fraction of oxygen to the atmosphere. The exact amount of oxygen is unknown because present day techniques lack the sophistication to measure oxygen. A new interdisciplinary endeavor at the University of Texas at Austin (UT) hopes to refine the important oxygen contribution seagrass meadows have by listening rather than looking. Historically oxygen production in seagrass is measured by an optical sensor, which is less than ideal because during the peak growing season it can’t “see” gas bubbles that are continuously being released by the plants. 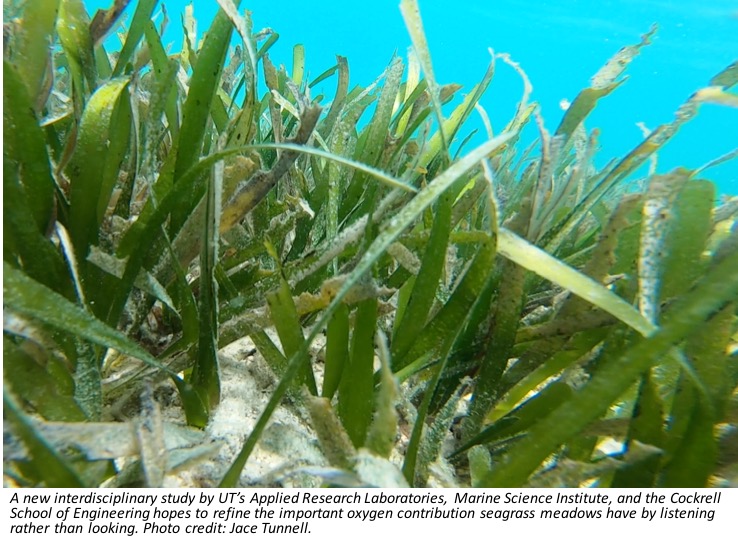 Scientists have long known that they are underestimating the photosynthetic production of seagrass, but with optical sensors there hasn’t been a solution. Using sound to measure production might be the answer. Acoustical sensors have the capability to not only measure the free gas bubbles emitting from the plants, but by using the sound reflecting from a seagrass plant, they can also measure the how much oxygen is within the plant’s tissues. This gives scientists, like Dr. Ken Dunton, professor at UT’s Marine Science Institute, a more complete picture of just how much oxygen seagrass is producing. “This new research is very exciting,” says Dunton. “Accurate measurements of oxygen production from plants that live in water is a fundamental problem in biology.” With a more complete picture of seagrass production, scientists can fully understand how changes in water clarity ultimately affect photosynthesis and carbon storage.