Losing Land and What it Means

The northern Alaska coast is losing up to 1.3 square miles of land every year to the sea which is equivalent to the area of Central Park in New York City. This loss of land has a dramatic impact on local marine food webs and greenhouse gas emissions. Nowhere is that impact more apparent than in Drew Point, Alaska which experiences giant land losses on average of 17.2 meters, or 56 feet, every year¬≠¬≠¬≠‚ÄĒit is one of the fastest eroding coastlines in the world. Graduate student Emily Bristol from the University of Texas Marine Science Institute in Port Aransas, Texas and her colleagues drilled into the eroding bluffs to determine what role erosion plays in freeing ancient carbon and nitrogen that was previously trapped in frozen ground.

In a recent manuscript in Frontiers in Earth Science, Bristol and colleagues described their efforts to determine how much carbon and nitrogen from the eroding bluffs are being released into the ocean to fuel food webs and greenhouse gas emissions. To understand how past geology can impact the amount of carbon and nitrogen stored in bluffs, the researchers drilled in three different types of terrain (ancient lake basins, recently drained lakes and no lakes) to collect cores from the tundra surface all the way to below sea level. With the help of mass spectrometry and dating the material with isotopes, the researchers were able to characterize the age and source of organic matter in the frozen soils and sediments. The researchers then used aerial images from a 52-year time period (1955-2017) to estimate erosion inputs of carbon and nitrogen.

The researchers found that this rapidly eroding coastline on the northern Alaskan coast is releasing 1,369 kilograms of carbon per meter every year during the 21st century (2002‚Äď2018). This rate, while staggering is even more so because it was nearly double the average flux of the previous half-century (1955‚Äď2002). Total nitrogen fluxes through coastal erosion had similar trends that emphasize coastal erosion is a significant pathway for both carbon and nitrogen trapped in permafrost to enter the ocean.

While erosion has shown to be a significant source of organic matter in the Arctic, the results from this indicate that analysis of the most rapidly eroding bluffs like in Drew Point, Alaska are important to collect because these areas are poised to contribute the greatest amount of carbon and nitrogen in the future.

Bristol is joined by her colleagues in contributing to this research: Craig Connolly and Jim McClelland from UTMSI; Thomas Lorenson and Bruce Richmond from United State Geological Survey; Anastasia Ilgen, Charles Choens, and Diana Bull from Sandia National Laboratories; Mikhail Kanevskiy and Benjamin Jones from University of Alaska Fairbanks; and Go Iwahana from International Arctic Research Center. This study was supported by Sandia National Laboratories and the National Science Foundation. 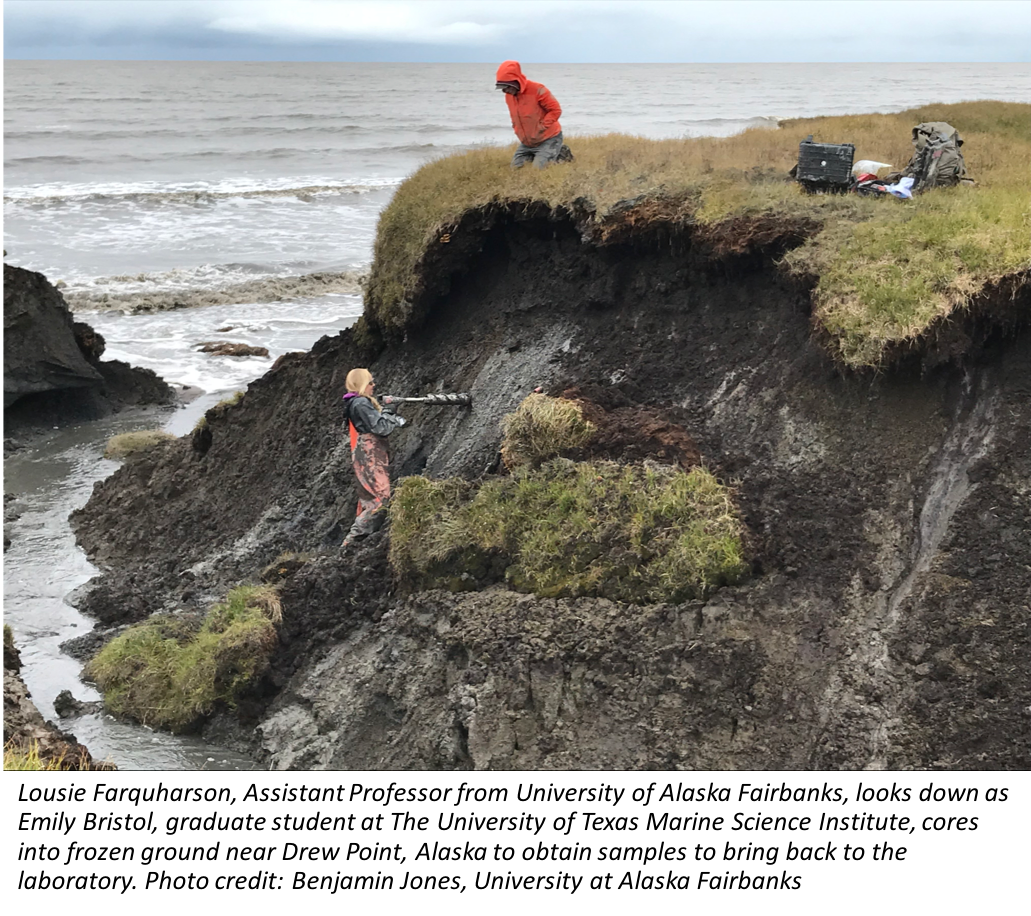