Viruses in mangrove muck may be important influencer of methane emission 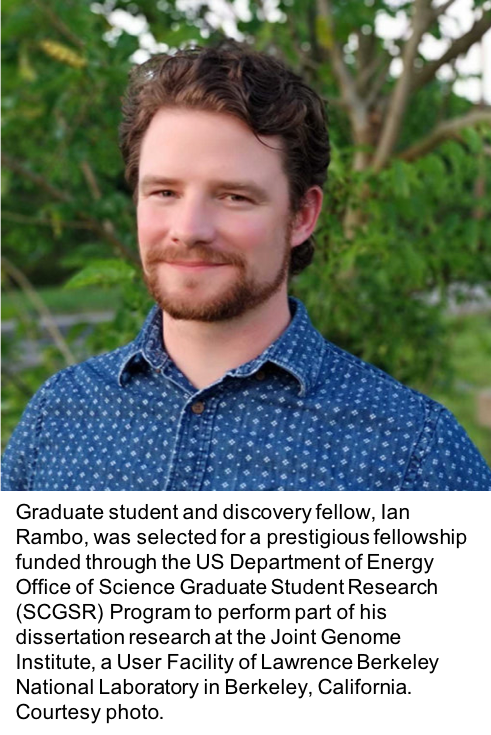 PORT ARANSAS - Viruses aren’t just in the germy smear a kindergartener can leave on the refrigerator door; they are all around us and infect every living creature. In fact, viruses may play a big role in the amount of methane released into the atmosphere by infecting microbes and changing how they process carbon to produce methane. There is a gaping void on the types and quantities of viruses in mangroves, how viruses infect the microbes, and how they change the microbe’s metabolism. Ian Rambo, a marine science Ph.D. candidate at The University of Texas Marine Science Institute and UTMSI’s first Discovery Fellow, is looking to fill-in the knowledge gap by using supercomputing powers to identify and unscramble the genes in these habitats to determine the impact of viruses on methane production.

Ian is in Dr. Brett Baker's lab and was selected for a prestigious fellowship funded through the US Department of Energy Office of Science Graduate Student Research (SCGSR) Program to perform part of his dissertation research at the Joint Genome Institute, a User Facility of Lawrence Berkeley National Laboratory in Berkeley, California.

Under the mentorship of Dr. Susannah Tringe, an expert in environmental genomics, wetland carbon cycling, and plant-microbe interactions, he will begin to tease out what the role and impact viruses have on methane emissions in Texas mangrove wetlands. Methane emissions in mangroves are important to understand because while they are productive habitats that produce massive amounts of oxygen and sequester atmospheric carbon, the soils underneath emit methane. While the presence of mangroves is a net benefit in terms of contribution to the atmosphere, it is still important to understand the mechanisms of how methane is produced and consumed. Mangroves drop so many leaves in a confined space that the soil underneath mangroves is typically anoxic, or lacking in oxygen. The role that viruses play in helping or hindering these microbes to decompose the mangrove detritus is key to understanding and predicting the amount of methane emission microbes produce and how much methane they contribute to the global climate. “Viruses can hijack the metabolism of host microbes and this could actually speed up a biogeochemical process that breaks down carbon compounds and produces methane,” said Rambo.

To determine the roles of microbe-virus interactions in these systems, Ian will utilize the supercomputing resources of the National Energy Research Scientific Computing Center and programs he will write to reconstruct microbial and viral genomes and catalog all or a large number of their genes from 2 terabytes of DNA and RNA sequence data from estuarine sediment samples. This is no simple task. To put that in perspective, about 100,000 trees made into paper would be needed to print 2 terabytes of data (source simplyted/blogspot.com). That is why Ian Rambo is blending microbiology with software development. Ian will collaborate as a developer with the DOE Systems Biology Knowledgebase, an open-source, community-based software and data platform geared towards reproducible analyses of large-scale biological data in a user-friendly, app-based graphical interface. He will create workflows that will enable users to reconstruct viral genomes, identify their taxonomy and their genes, and predict how a virus’ genes may alter a host microbe’s metabolism in the event of an infection. The programs he writes will provide a roadmap for how microbial metabolism works and how the viruses are affecting it.

“I’m excited to be working with the Joint Genome Institute. During the partnership I hope to discover and define hundreds to thousands of new virus genomes, and collaborate with some of the top researchers in the field” reflected Rambo. Through his work, Ian will be the first person to put a definitive calculation on how much impact viruses have on this important source of methane emission. This research is important because it will help refine calculations of methane emissions, that climate scientists can use to make better predictions of global carbon cycling. 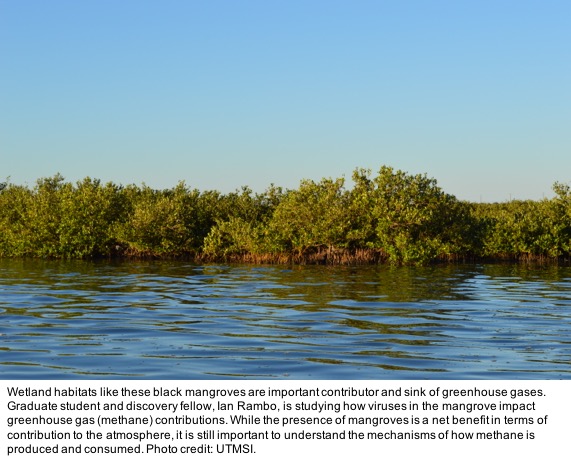