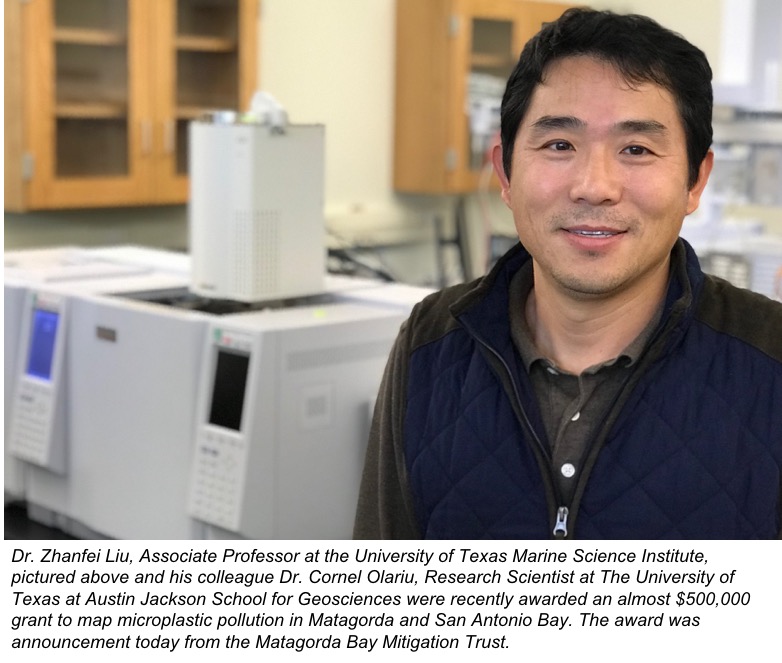 Microplastics and plastic pellet contamination in local bays received national attend last year when petrochemical company Formosa Plastics agreed to pay $50 million in the largest-ever settlement of a lawsuit linked to the federal Clean Water Act. A portion of that settlement was allocated today from the Matagorda Bay Mitigation Trust. Steven Raabe, Trustee of the Matagorda Bay Mitigation Trust, announced that nine projects, from six entities, totaling 3.2 million dollars have been approved for funding. One of those projects will be completed by local researcher, Dr. Zhanfei Liu, Associate Professor at the University of Texas Marine Science Institute and his colleague Dr. Cornel Olariu, Research Scientist at The University of Texas at Austin Jackson School for Geosciences.

Their new research endeavor will map microplastics in the water and upper sediment of Matagorda and San Antonio Bays. This will provide valuable information of where the “hot spots” are to help track how the microplastics, both recent and in the past, are getting into the bay system and where they go once there. Due to their small size and buoyancy, microplastics are notoriously difficult to contain and track. The identification of the hotspot areas is extremely important because microplastics buried in sediments can be re-suspended and redeposited during river floods or hurricanes, becoming an intrinsic source of pollution within the bay itself. To make matters worse, microplastics have long-reaching impacts on the environment because they are resistant to weathering.

To create detailed and accurate maps, the researchers will sample the water and sediment within the bays for three years and anticipate final maps with concentrations and polymer types of microplastics in 2024. These maps will be a reference point for future trends/evolution of the microplastic pollution. The maps will finally give resource managers valuable information of how microplastics, including plastic pellets, move throughout the bays and where concentrations lie for mitigation efforts.