Migrations of the Fin and Wing Variety 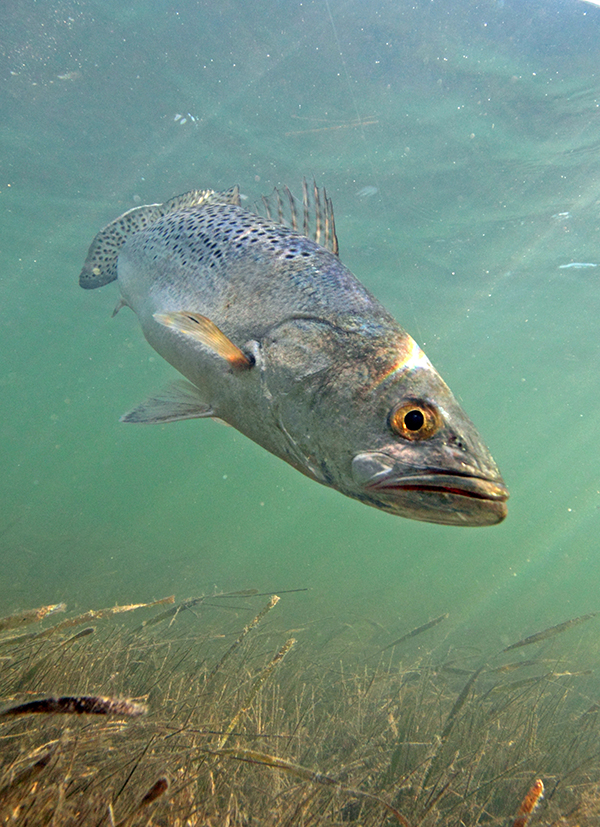 Sea trout will be the focus of a study by Dr. Brad Erisman to learn more about where they spawn. Credit: Evan D'Alessandro.PORT ARANSAS, Texas – Marine Scientists at The University of Texas Marine Science Institute have been awarded funds from Texas State Aquarium’s Wildlife Care, Conservation and Research (WCCR) Fund to better understand the movement of spotted sea trout and monarch butterflies.

Dr. Brad Erisman will use the new funds to help determine where spotted seatrout are spawning around Port Aransas. Throughout the Gulf of Mexico, spotted seatrout are common in local bays and are some of the most prized targets of saltwater recreational fisheries in Texas. While seatrout are generally known to aggregate and spawn from April through September each year, the specific locations and distribution of critical spawning habitats have not been identified or characterized for our local waters.

In order to figure out where these fish are spawning, Erisman will install hydrophones throughout Aransas and Mission Bay to track mating calls of male fish. In addition, he will enlist the help of local anglers to capture, identify, and release females ready to release eggs. Male seatrout make courtship sounds that are unique to the season and location of their spawns. We can use hydrophones to identify the locations of aggregating males looking to mate. “The project also provides a unique opportunity to get local anglers directly involved in the project, thereby increasing their support and contributions to scientific research that seeks to improve fisheries management” says Erisman. Spawning female seatrout are easy to identify due to their enlarged abdomens and clear visual cues of the ovaries. Therefore, fishing guides and anglers can easily participate in the project by simply sending photos of fish ovaries along with information on location and time of collection. Photos of females taken by anglers will be combined with data from mobile hydrophone surveys and fixed hydrophone stations at strategic locations to create a detailed map of the locations and characteristics of spawning habitat. Anglers interested in participating can contact This email address is being protected from spambots. You need JavaScript enabled to view it. directly.

Dr. Tracy Villareal will be using technology from smart phones and tablets to help track the migrating patterns of monarch butterflies across the Gulf of Mexico. In particular, Villareal is interested in utilizing the assistance of citizen scientists to help him and collaborating biologists determine the extent of monarchs’ use of offshore oil platforms and vessels. Scientists have noticed the number of butterflies migrating in recent years has decreased, with the 2013-2014 overwintering population down to only 10% of the 1994-2012 average, according to MonarchWatch.org. To learn more, researchers are enlisting the help of citizen scientists to track the survivors. The new funding from the Texas State Aquarium’s WCCR Fund will be combined with donations from a crowdfunding program, Hornraiser, to gather big data on ocean-bound monarchs. Across North America people are already recording butterflies landing in backyards and meadows. But their over-water flights are less closely monitored and not well understood. Dr. Villareal is asking the question, “Is this part of their migration or just their bad luck to be blown out sea to perish?”

“You may think it’s odd that a marine scientist would look at butterflies,” says Villareal, “but it turns out there is a link.” Monarchs are thought to avoid flying over water, but there are records of them resting on oil platforms in the Gulf of Mexico. When Villareal realized monarchs were landing on structures in the ocean, he thought his knowledge of wind, weather and large oceanic systems could contribute to the biology of the monarch’s migration. Villareal has some hypotheses for why monarchs are migrating over the ocean. “One is that it’s a shortcut across the Gulf of Mexico as part of the annual fall migration,” he says. “The other is that it is accidental as a result of weather.” To determine whether this oceanic voyage is intentional, accidental or just a random occurrence, he needs data. The Monarch Migration app, released this fall on iTunes, will gather the data Villareal needs. 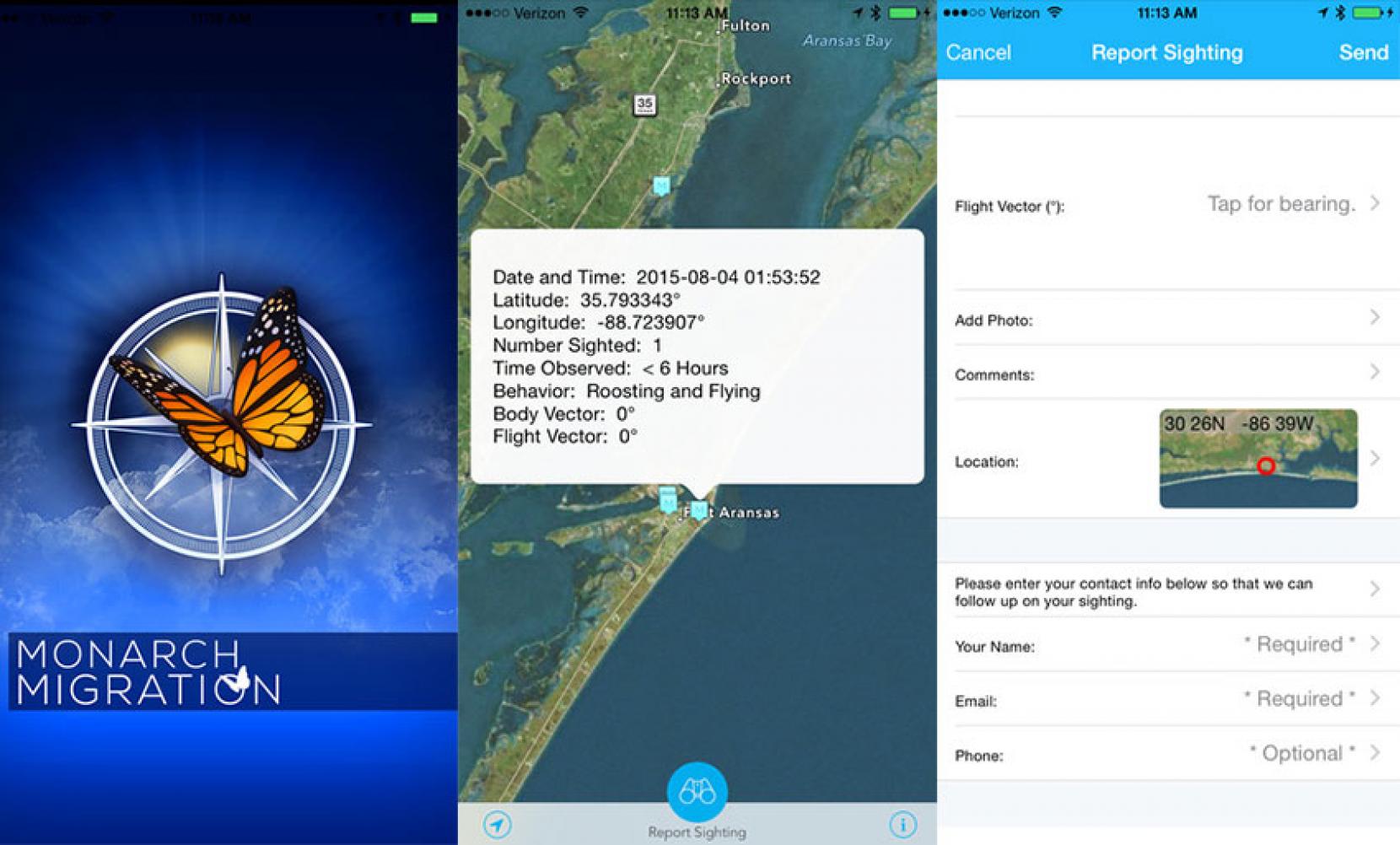 The Marine Monarchs project will help track migrating monarch butterflies over the Gulf of Mexico with a new app. Credit: Tracy Villareal, Artwork by Kim Rullo.Using the simple app, it takes about 10 seconds to report a butterfly sighting. Villareal is enlisting help from boaters, fisherman, oil workers and islanders to capture butterflies at sea, but he wants a greater reach — the goal is to get as many people offshore as possible to use the app.

“If I had 10 rigs reporting from offshore, scattered in the northwest Gulf of Mexico, I would be very happy,” he says. (To participate, download the app or This email address is being protected from spambots. You need JavaScript enabled to view it..)
Understanding monarchs’ migration patterns is important because the butterflies are considered to be a “canary in the coal mine.” Decreasing populations of monarchs could indicate a larger threat to pollinators in general. “Their fate is tied to other less visible, but critically important insects that pollinate our crops and keep our wild ecosystems intact,” says Villareal.

Both of the projects will receive support from the Texas State Aquarium’s Wildlife Care, Conservation and Research (WCCR) Fund. Aquarium Vice President of Education and Conservation Leslie Peart said, “The Aquarium is pleased to support this select group of scientists and conservation managers who aim to save important Gulf species and habitats of concern. We look forward to sharing their methods and results with visiting families and school groups through special exhibits and learning programs throughout the year.”