A Mother’s Diet Changes the Metabolism of Her Children

May 08 Posted by Sally Palmer in Spotlights 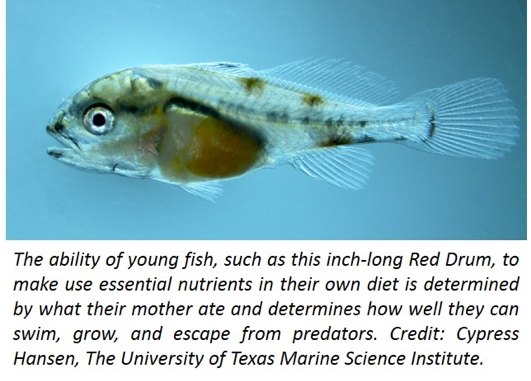 Scientists at The University of Texas Marine Science Institute in Port Aransas, Texas have discovered that just like humans, the nutrients that are passed from a mother fish to her offspring can change the way her offspring develop and make a big difference in how well they do in life. This phenomenon in which prenatal nutrition can permanently alter the metabolism of offspring – called metabolic programming – has been studied almost exclusively in mammals and is believed to be a cause of important medical disorders in humans including hypertension, obesity, and heart disease. Never before have scientists considered what metabolic programming might mean in nature.

Dr. Lee Fuiman has been working on understanding the impacts of maternal diet on eggs and juvenile fish. He has discovered that the amount of a specific nutrient, the omega-3 fatty acid DHA, that a female fish puts into the yolk in her eggs controls how much DHA her offspring can obtain from their own diet several weeks after they hatch. The amount of DHA young fishes get from their diet also plays a big role in how well they can swim, grow, and escape from predators.

Many fish, like Red Drum and Southern Flounder, get most of the DHA that is passed on to their offspring from shrimp and crabs. Decreases in these two food sources, caused by environmental conditions or commercial harvest, is likely to have an impact on the ability of young fish to survive at a time in life when they are small and especially susceptible to predators and starvation. The research also points to a way to use metabolic programming to benefit fish populations. Several states have stocking programs in which they breed Red Drum in hatcheries and release millions of young fish into the wild to supplement natural populations. This research suggests that those hatcheries may be able to improve the survival of the fish they release through close attention to the nutrition of the adult fish and the quality of eggs they produce.

In fact, the researchers are now working with Texas Parks and Wildlife Department’s hatcheries in Corpus Christi and Lake Jackson to determine the extent to which the mother’s diet can improve the survival of Southern Flounder larvae they are releasing into Texas bays.