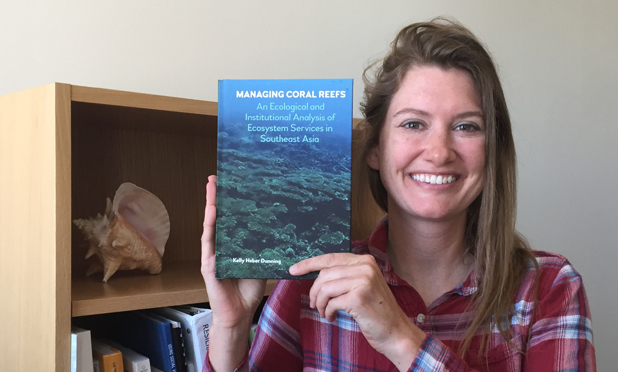 Coral reefs are in peril and a new book, "Managing Coral Reefs," written by Dr. Kelly Dunning at The University of Texas Marine Science Institute and Mission-Aransas Reserve describes how two different countries in Southeast Asia use two drastically different approaches to conserve their coral reef habitats. In her book, Dr. Dunning relies upon first-hand experience to tease apart the pros and cons of conservation strategies. With over 300 dive-surveys and months of work in the field, Dunning discovered that the coral reefs in countries such as Indonesia, who made efforts to empower local communities, fared much better than countries, such as Malaysia, who tried to implement conversation from the top-down. “What was so enlightening was the creativity that people used when given the chance,” said Dunning.

In the book, Dunning describes how the Indonesian government is placing reef conservation responsibilities in the hands of local villagers and why it is working. One such strategy was the community efforts to rid their reefs of the crown-of-thorns starfish during outbreaks of this species. This starfish has venomous spines and feeds on coral. When there is a population explosion of these starfish, reefs can suffer. The Indonesian government and local organizations worked with villagers to train them to carefully harvest the starfish. Dunning also discovered that not only do the reefs suffer with these creatures, but people can too. She found out the hard way and was stung while participating in a village harvest. “When a bag of crown of thorns starfish was dropped on my hand during a culling effort, it swelled up to double its size, and I had first-hand experience why the starfish was so difficult to remove from these reefs. It showed how much hard work locals are putting into managing their reefs for their livelihoods.” said Dunning.

This example of a local conservation strategy and the partnerships between the government and local villagers were in stark contrast to what Dunning documented in Malaysia. In that country, the majority of the management decisions for coral reefs are made by the government in the capital of Kuala Lumpur far from the coast. Dunning found that the disconnect between the government and the local communities often resulted in mismanaged reefs that were prone to overfishing, pollution, damage to the corals. As coral reefs become under increasing pressure in South East Asia, and in fact throughout the world, Dunning’s book provides hope that there are tested strategies to help preserve these systems for their beauty and economic benefit of the communities that rely upon them.