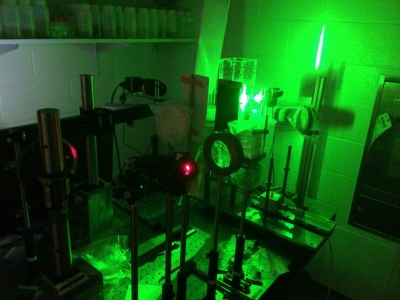 Small scale experiment in lab. Credit: Jeffery Cordero.The interactions of plankton with oil droplets is a fascinating but relatively unexplored area. Scientists in the DROPPS Consortium previously looked at oil droplets rising though thin layer of plankton to see how they interact with oil. This time DROPPS wanted to look further into what may have happened in the dispersed oil layers between the well head, at approximately 5,000 feet below sea level, and the ocean surface. DROPPS Scientists used holography technology, small scale experiments in the lab, and a recently constructed tower tank, measuring approximately 4 meters tall, for their latest experiments.

DROPPS’ recent experiments involved holography technology which allows you to construct volume in 3D. This shows a 3D distribution of water and how it interacts with particles. DROPPS scientists were able to take a closer look at what could have happened to plumes of oil released from the Deepwater Horizon well head that had been mixed with dispersant. Studies showed dispersants created subsurface plumes of tiny oil droplets. DROPPS recreated this in the laboratory by creating a layer of microscopic droplets (by adding dispersant to oil and mixing it up with seawater using stir plates), mimicking the subsurface layers associated with the Deepwater Horizon. They also created varying density layers in the water (by slightly changing the salinity), with the most dense water at the bottom, intermediate water in the middle, and lighter water at the top. They wanted to see how quickly oil would diffuse through these layers. Seawater density can change throughout the water column, with the most rapid changes often occurring near the bottom of the thermocline. With the tower tank experiments, they set up layers to see how the micro oil droplets would disperse naturally, with and without small organisms swimming through it or with larger organisms stirring up the water. This would help measure the importance of biogenic mixing (mixing of the ocean by animals), an idea that has recently been of great interest to biologists and oceanographers.

First, DROPPS scientists conducted small scale experiments in the lab. In these experiments, they added small zooplankton, copepods mostly, and used PIV to examine how or if they mixed a layer of oil. The copepods did not seem to have much effect on the dispersion of the oil layer, probably because they were too small. Tiny oil droplets have natural fluorescence so they glow when exposed to certain wavelengths of light. This allows DROPPS scientists to measure how well the animals mix the oil-water emulsion layer in comparison to natural diffusion.

In the large tower tank experiment, they produced physical dispersion by using larger organisms (jellyfish), which had more of an effect on the layer containing dispersed oil. 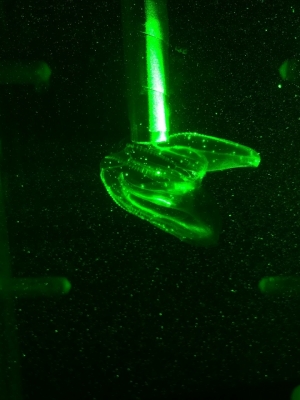 In the future they hope to use intermediate sized organisms such as shrimp and small fish to examine their effects of biogenic mixing of dispersed oil. In the future, DROPPS scientists also wanted to study how these organisms interact with the dispersed oil layers; do copepods and other small zooplankton feed on the oil? Does this make them more susceptible to their predators (jellyfish and small fish)?