May 29 Posted by Sally Palmer in Spotlights 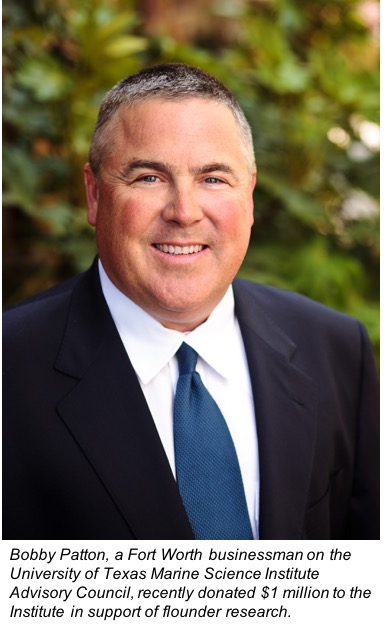 In Texas and throughout the South, Southern Flounder are a favorite among anglers and seafood enthusiasts. The bad news is Southern Flounder populations across the South and Southeastern U.S. have been in decline since the 1970s.

One man has taken on the challenge to reverse the downward trend through science and education. This week, Bobby Patton, a Fort Worth businessman on the University of Texas Marine Science Institute Advisory Council, donated $1 million to the Institute in support of flounder research. An avid angler and member of the Texas Parks and Wildlife Commission, Mr. Patton is well aware of the perils that flounder face.

“I’m passionate about fishing and committed to making decisions with the best facts available. As a commissioner on Texas Parks and Wildlife Commission, I want to do what is right for flounder and what is right for Texas. I think there is universal agreement that flounder populations are in trouble not only in Texas but nationwide,” said Patton.

Bobby Patton is also intimately familiar with the benefits that scientific research can bring to fisheries management. The Institute has a long history of revealing the mysteries of fish reproduction and life-cycles necessary for robust and sustainable populations. Institute scientists will now focus their efforts on Southern Flounder.

“There is agreement amongst recreational and commercial fishermen supporting sound management to reverse that decline. The research goal is to couple what is already known about flounder with new findings, educate the public on best practices and provide the best information to inform decision-makers,” Patton said.

The timing of this donation couldn’t be better. Just last week, the Texas Parks and Wildlife Commission moved to adopt new flounder regulations but delayed their implementation for a year. This new donation will dramatically increase understanding of flounder reproductive capacity and the critical times in their life cycle that require special attention from fishery managers and anglers to reverse the decline in Southern Flounder populations.