Piggy Perch on the Move

May 17 Posted by Sally Palmer in Spotlights

If you’re an angler, you may be intimately familiar with a piggy perch. These small, seemingly inconsequential fish are a highly sought-after bait for catching trout and redfish.

Doctoral student Zhenxin Hou measures a piggy perch. The fish will accompany several thousand of its peers to a fish farm in Palacios, Texas, where fish farmer Mark Kubecka will test the optimal density to raise the fish for commercial production.They sell for $5.00 to $7.00 per dozen at bait stands which are supplied entirely by fish trapped from the bays during May through July. Each bait stand around Port Aransas sells about 40,000 pigfish during those three months. Multiply this number by the 5-10 large bait stands in the Port Aransas area and it is clear that there must be a big impact on the ecology of our bays by removing so many pigfish during the summer. Producing pigfish through aquaculture could greatly reduce this impact.

Researchers at the Fisheries and Mariculture Laboratory are working on the requirements for spawning adult piggy perch, rearing larvae, and growing the fish out to market size. We have already determined the optimal amount of feed to maximize growth rate while minimizing feed waste, and we have identified the optimal temperatures for rearing and grow-out. The next step is to put the science to the test in a real-world environment.

Earlier this week, our scientists harvested several thousand fingerling piggy perch and transferred them to Mark Kubecka, who has a fish farm in Palacios, Texas. Mark is collaborating with us on a federally sponsored research grant that aims to develop the technology for farming piggy perch as a commercial product. Mark will take the young fish that we have been growing for about six weeks to his farm and place them in cages in one of his ponds so we can determine the optimal density of fish to raise together. “I’m really excited about this project because the research questions were specifically those that would be of value to a fish farmer in terms of the commercial needs and economics” said lead scientist, Dr. Lee Fuiman.

In addition, Dr. Fuiman and his team are collaborating with economist Dr. Andrew Ropicki from Texas Sea Grant to determine whether commercial production of piggy perch can be economically viable and to identify future research needs that will provide the biggest economic bang for the buck. 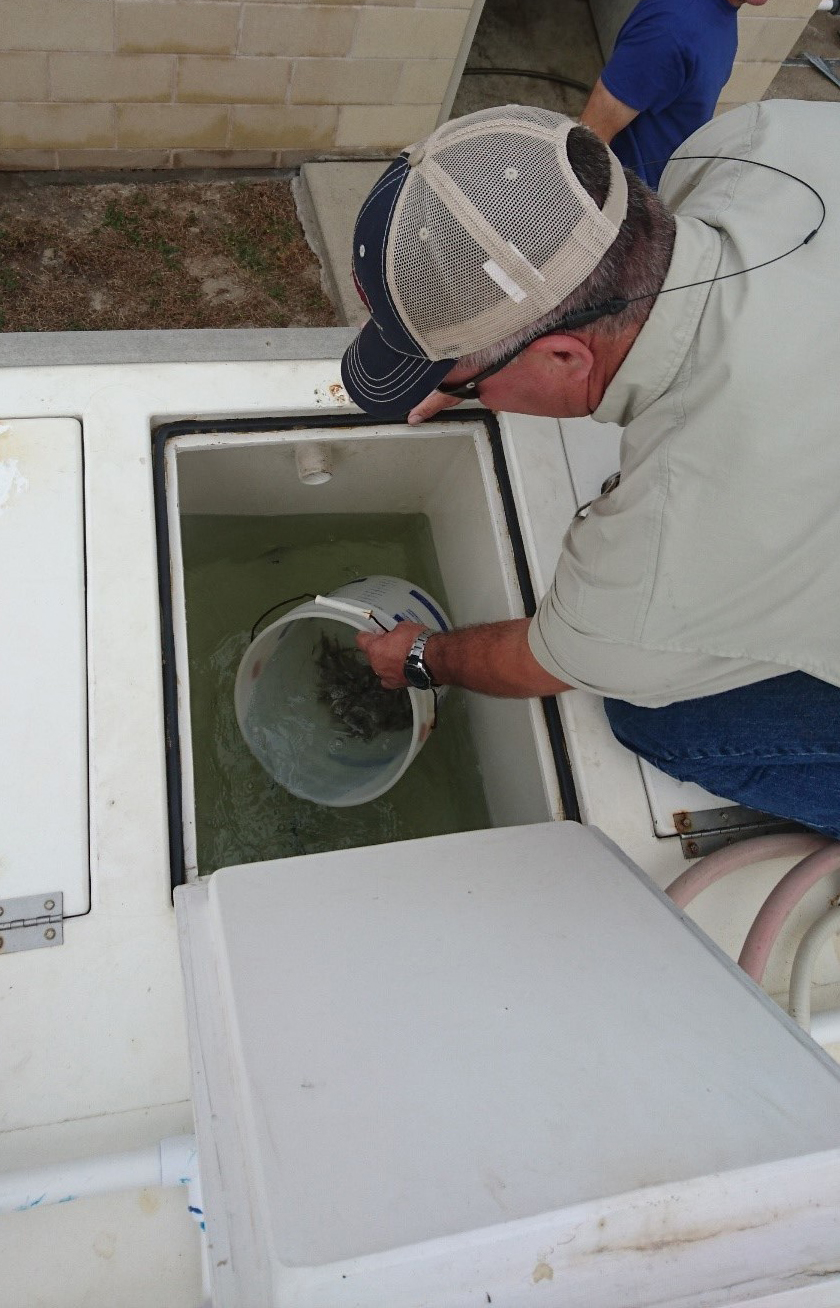 Mark Kubecka transfers piggy perch to a fish-hauling trailer before taking them to his fish farm in Palacios, Texas. Photo credit: Lee Fuiman.Piggy perch aquaculture shows very promising results. The technology could be commercialized, resulting in new jobs, reduced impact on the ecology of our bays, and potentially year-round availability of baitfish to increase fishing opportunities.

This study is supported by Texas Sea Grant and the Saltonstall-Kennedy Grant Programs, both of which are funded through the National Oceanic and Atmospheric Administration.