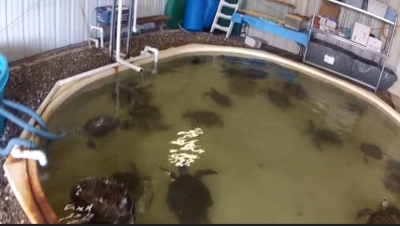 PORT ARANSAS, TX – Texas’s very own Tony Amos of the University of Texas Marine Science Institute (UTMSI) in Port Aransas will be featured this Saturday, October 11th at 9:00 am on ABC’s Sea Rescue “Polar Vortex Turtles” episode. The show will feature the plight and rescue of over 1,000 sea turtle on the central Texas Coast from this past winter’s freezing events.

The UTMSI rescued 528 cold stunned green sea turtles last winter, and at the peak of the event there were 281 turtles in our care. Sea turtles are cold-blooded reptiles and require warm temperature to stay alive. When the water dips below 60 degrees Fahrenheit, turtles start to get in trouble and can have decreased heart rate, circulation, and exhibit lethargy followed by shock, pneumonia and possible death. Water temperature that reaches 50 degrees Fahrenheit are almost always fatal.  The Gulf of Mexico water has been getting warmer over the years, which is usually good news for green sea turtles because they don’t have to migrate and can stay here year-round to feed on abundant algae and invertebrates found on the Packery and Port Aransas jetties. This however is a double-edged sword, turtles can also be trapped when the temperature drops, leaving them stunned by the cold and risking death. 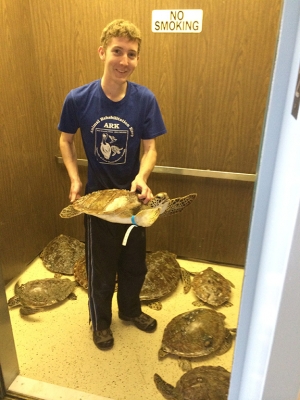 During the freezing events this past winter, the Animal Rehabilitation Keep (ARK) at UTMSI was a key player in saving many of these endangered sea turtles. At one time, over 200 turtles were being rehabilitated in a tank the size of a large swimming pool that was built for one turtle that cannot be returned to the wild! Turtles took up all the available space - UTMSI was rehabbing the turtles in kiddie pools (4-5 turtles per pool) that overflowed into the Institute’s wet lab areas and halls. The scientists found themselves sharing their laboratory space with some of the more potent smelling sea turtles. Over the course of the event, the ARK was able to rehabilitate over 93% of the sea turtles brought in alive. On the largest release we had a convoy of 37 vehicles packed with turtles heading to the Padre Island National Seashore.

Don’t miss the exciting episode of this unique cold stunning event and the rescuing feats of your local hero, Tony Amos. The show starts this Saturday, October 11th at 9:00 a.m. on KIII in Corpus Christi. (Check you local listing for differences in cable and antennae viewing)

PORT ARANSAS, TX – After watching the ABC Sea Rescue television episode, make sure to come to Mustang Island Beach at Marker 35 at 11 a.m. for a public viewing of the release of several green sea turtles. These sea turtles were not rescued from the cold, but rather from fibropapillomatosis, which is a disease specific to marine turtles that causes tumors. Leeches specifically found on sea turtles are thought to be the primary vector transmitting the disease. Usually the tumors are benign and found on the outside of the body, but they can become a problem when they impede vision, feeding and movement.

The Animal Rehabilitation Keep at the University of Texas Marine Science Institute rescued and rehabilitated several of the sea turtles affected by fibropapillomatosis. There will be five or six large sub-adult green sea turtles released at Saturday’s event, with the largest one weighing over 120 pounds. The turtles were placed in isolation until they were cleaned of any possible leech contamination and they were treated with removal of their tumors by veterinarian Dr. Tim Tristan.

Fibropapillomatosis is known to affect sea turtles worldwide, but this has been the first reported case on the Texas Coast. Generally fibropapillomatosis is most prominent in warmer climates. Florida and Hawaii have larger nesting colonies of green sea turtles and also high incidences of the disease. The warmer temperatures experienced by the Gulf of Mexico could the reason why the disease has been found on turtles in Texas, and researchers will be keep a sharp eye out for future incidences and spread of the disease.