May 07 Posted by Sally Palmer in Spotlights 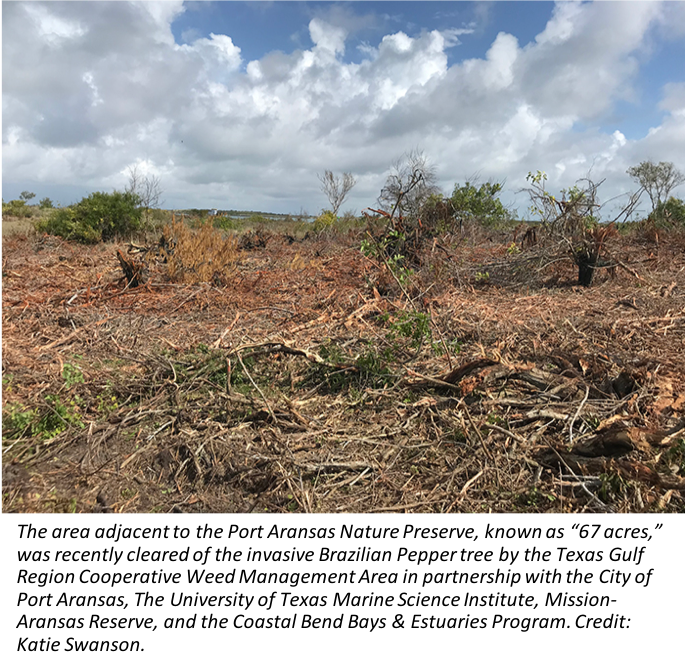 Grassland birds may soon be rejoicing and singing a different tune. The “67 acres” by Port Street is the newest area targeted for restoration of grassland habitat. The University of Texas Marine Science Institute and the City of Port Aransas have teamed up through the Texas Gulf Region Cooperative Weed Management Area to restore the area to native grasslands by clearing the invasive Brazilian peppertrees on city property. This thick shrub/tree is prevalent in Nueces County and along the Texas coast, and has been identified as an invasive species by the U.S. Department of Agriculture. It can grow in stands dense enough to choke out native grasses, usurp nutrients and there is some evidence that it produces chemicals that inhibit the growth of native plants.

In mid-May, a contractor began clearing and mulching Brazilian peppertrees on city property called “67 acres.” This area is directly adjacent to the Port Aransas Nature Preserve and Port Street. The stands of Brazilian peppertree were a major seed bank to the Port Aransas Nature Preserve and surrounding neighborhoods. The goal was to cut down Brazilian peppertrees in 40 of the 67 acres on the property closest to the nature preserve. Contractors used a forestry mulcher to chop down the trees and mulch in place. This will be followed by two herbicide treatments to attack subsequent new growth of Brazilian peppertrees. The 67 acres contains several native grass species which should begin to take over their rightful space after the removal. This project is supported by the Mission-Aransas Reserve through a grant from the United States Fish and Wildlife Services and the Coastal Bend Bays & Estuaries Program.

The Texas Gulf Region Cooperative Weed Management Area (CWMA) was established in 2014 by the City of Port Aransas and initial partners the Texas A&M Forest Service and Lady Bird Johnson Wildflower Center. The mission of this CWMA is to address invasive Brazilian peppertree (Schinus terebinthifolious) from Port O'Connor to Packery Channel on the Texas Gulf Coast. To date ten projects have cleared and restored 530 acres of habitat in the Coastal Bend.

To learn more about the effort and the invasive Brazilian peppertree check out this video.