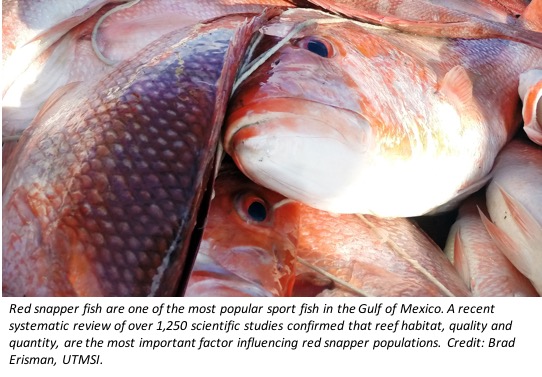 The heart of the red snapper fishery is the Gulf of Mexico and their populations have fluctuated throughout the decades. Efforts to manage the fishery and the popularity of the fish has resulted in a large volume of research dedicated to understanding red snapper populations. A new review by researchers, led by Dr. Brad Erisman, Assistant Professor and Derek Bolser, graduate student both from the University of Texas Marine Science Institute in Port Aransas, gathered information from over 1,250 studies and reports and analyzed them in a systematic way to determine what factors mattered most to red snapper populations. In particular the researchers reviewed the data from all age classes, juveniles to adults, and what elements had the most influence on the size of snappers populations in the entire Gulf – was it their environment, such as water temperature and salinity, or their home, such as reef quality and quantity? Earlier studies often focused on only a small set of factors, like temperature or reef quality, that impact red snapper populations or focused on only a few hotspot areas rather than looking at the whole Gulf.

After reviewing the wealth of data, the systematic analysis confirmed that reef habitat is the most important factor influencing red snapper populations. Red snapper are reef fish and in the Gulf of Mexico the availability of natural and artificial reefs are the limiting factor in red snapper abundance. Because of the finite amount of reef habitat, predation and competition are controlling whether red snapper live or die instead of the water properties around them. “In this collective effort, we confirmed our suspicions that the habitat is of upmost importance to red snapper,” said lead author Erisman. “It really comes down to space and the quality of that space - you can only pack so many fish around a reef with enough food and shelter.”

The review also confirmed that juvenile fish are much more sensitive to starvation and predation, while older fish tended to be more resilient. It turns out that snapper will prey upon themselves, “if there are many different ages of red snapper on a reef, the older snapper prey upon the young snapper, which can be a big population driver,” said Erisman.

The fact that reef availability and quality matters more than the water didn’t come as a surprise. The Gulf of Mexico is the center of red snapper distributions and the Gulf has frequent and strong fluctuations in water temperature, salinity and dissolved oxygen. The authors cite that red snapper have evolved to withstand and rebound from extreme storms, rainfall and seasonal dead zones.

Despite the tremendous amount of research that enabled such a thorough review of red snapper, the authors noted that there are still many questions left unanswered. The majority of the red snapper research occurred in two hotspots and larger regional research studies are needed to fully understand red snapper populations and help predict their future.

This review resulted from a workshop that was funded by the National Academies of Sciences Engineering and Medicine Gulf Research Program in 2017 in which successful applicants from around the country attended a two-week training workshop hosted by National Center for Ecological Analysis and Synthesis on ‘big-data’ science and open science approaches. As part of the workshop, groups were formed to work on separate projects. The red snapper team was composed of graduate students, postdoctoral fellows, professors, and researchers from The University of Texas Marine Science Institute, University of South Florida, University of California San Diego, Louisiana State University, University of Southern Mississippi, The Ocean Conservancy, and George Mason University. It was truly a collaborative effort.