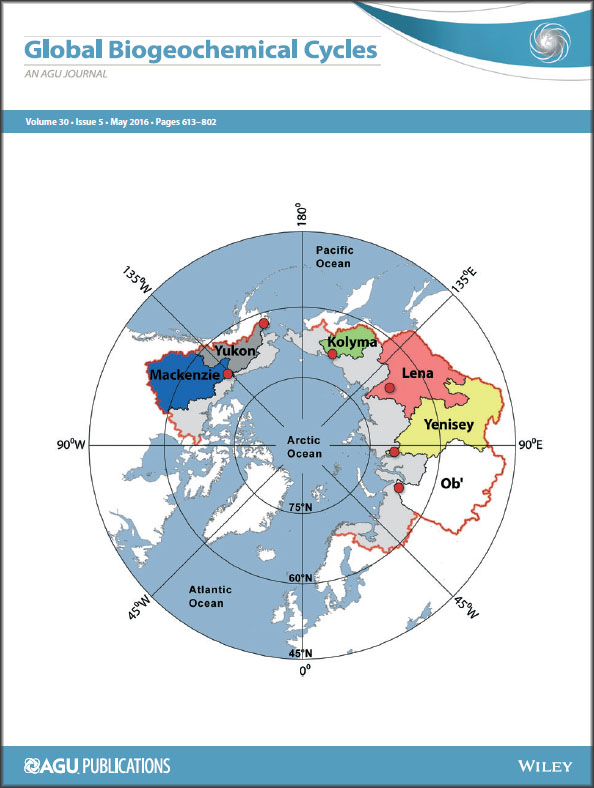 McClelland and colleagues estimated river export of particulate organic carbon and nitrogen from a 20.5 million square kilometer land area (north of red line on map) that drains to the Arctic Ocean and surrounding seas. Data from coordinated sampling efforts between 2003 and 2012 on the Mackenzie, Yukon, Kolyma, Lena, Yenisey, and Ob’ rivers were used to calculate export estimates (red dots mark sampling locations within each river’s drainage basin). Regional to pan-Arctic patterns in biogeochemical properties of river water were also characterized and provide valuable benchmarks for tracking and anticipating climate impacts in the Arctic. Map created by Greg Fiske.A new study released this summer sheds new light on the amount and character of particulate organic material being transported by rivers to the Arctic Ocean. The Arctic Ocean is relatively small compared to the land area that drains into it, so river inputs have a major impact on how the Arctic Ocean ecosystem, from plankton to polar bears, operates. Yet, our understanding of river-ocean connections in the Arctic has lagged far behind our understanding of these connections at lower latitudes. The results of this study are helping to close this knowledge gap.

Lead author, Jim McClelland, from The University of Texas Marine Science Institute and his colleagues were specifically interested in increasing the library of knowledge about particulate organic material that fast flowing and massive rivers carry from the land to the ocean in the Arctic. This organic material, which includes essential elements such as carbon and nitrogen, is an important component of the overall sediment load that is carried by rivers. Most of it comes from decaying plant material in soils, and radiocarbon results show that the average age of this organic material is 2000 – 6000 years old. This age range suggests that permafrost (deeper soil layers that have historically remained frozen throughout the year) is a major source of particulate organic matter in the rivers. To date, scientists have not put very much emphasis on figuring the transport rates of particulate organic matter in Arctic rivers, but these very small particles can have a big impact on the productivity of the ocean and help fuel its food webs.

The research provides new insight to the seasonal differences and average conditions from six massive rivers that drain into the Arctic Ocean. Four of these rivers flow from the Eurasian continent and two of them flow from North America. The rivers provide about 10% of all of the water that is discharged on Earth, and the new study provides valuable information for scientists working to understand how the Arctic contributes to global carbon and nitrogen cycles.

This research was supported by the National Science Foundation, U.S. Geological Survey, and the Department of Indian and Northern Affairs in Canada. It is product of the Arctic Great Rivers Observatory (Arctic-GRO).