Around Campus with Ryan Hladyniuk

We sat down with Dr. Ryan Hladyniuk to talk about his penchant for trouble-shooting and why isotopes are important. 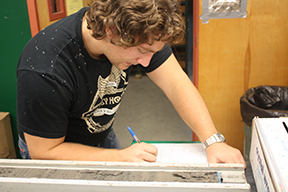 Ryan Hladyniuk making note of sediment core features from an 18-meter long core obtained from Lake Ontario, Canada. Courtesy photo.Tell me a little bit about yourself.
I was born in Thunder Bay, Ontario, Canada and to give you a sense of direction, it is located on north shore of Lake Superior. The city of Thunder Bay is known for producing the most NHL hockey players per capita in the world, I can likely find a reference for that, and unfortunately I wasn’t a part of the inclusive statistical group. I had a wonderful childhood, largely because my parents allowed my brother and I the freedom to take part in whatever we could basically get into (sports, mechanics, mountain bike racing, fishing). At a young age I started playing hockey and I just recently retired from the game. I completed my education, both B.Sc. and Ph.D, at The University of Western Ontario in London, Ontario, Canada under the incredible mentorship of Dr. Fred Longstaffe. I have a wife, Melissa, and three kids (Keaton, Tatem and Hope).

I see the hockey frame behind you; how far did you go and do you miss it?
I was in a Senior AA league before I came here. Sometimes the local newspaper would interview me in my stable isotope laboratory and the reporters always seemed to weave in isotopes to the sports piece (he says with a smile). I would like my son to learn to skate and to play hockey, just might be difficult to find some ice in south Texas. Hockey has taught me so many valuable life skills; I want to make sure Keaton has those opportunities.

What you do at UTMSI and how long you’ve worked here?
I came to UTMSI in September 2015. My day-to-day operation is to manage, maintain and operate the instrumentation in the Core laboratory; this often includes a lot of trouble-shooting. A large part of my day will be spent analyzing the stable isotope ratios of marine sediments, water, plants or animals. We have two isotope ratio mass spectrometers in the Core Lab. The older one is connected to an elemental analyzer and our newest is connected to a Gasbench and a GC. We also have a stand-alone elemental analyzer.  The peripheral devices connected to our two mass spectrometers are different and can measure different isotopes of different material. One measures the carbon and nitrogen isotopic composition of samples, such as sea grass, soils/sediments, fish tissue and nutrient filters, for example.

Hang on, can you explain what an isotope is and why it is important?
An isotope is an atom of the same element that differs in the number of neutrons, thus making the atomic mass different, for example, carbon-12 and carbon-13. Isotopes of the same element will have the same number of protons (react the same chemically), but the mass difference, imparted by in the number of neutrons, allows them to behave differently in the environment. The isotope-ratio-mass spectrometers can measure the ratio of the heavy versus light isotopes in a sample. These ratios can be used to ascertain how the isotopes ‘moved’ in the environment, revealing varying environmental stressors. It’s almost like a fingerprint for environment conditions. For example, we can use the carbon and nitrogen isotopic compositions of marine animal tissues to construct food webs or the oxygen and hydrogen isotopic composition of water to trace water fluxes marine systems. 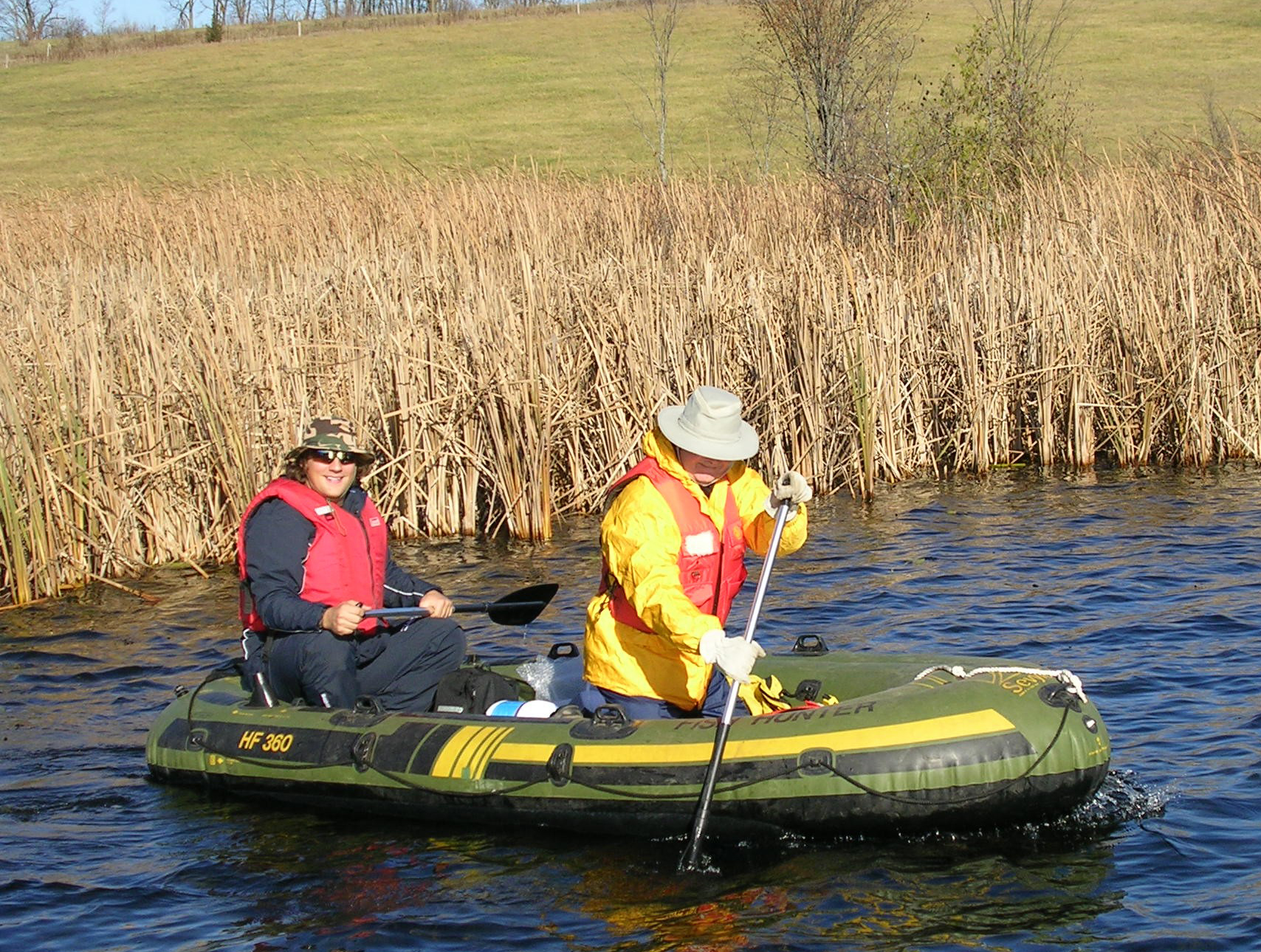 Fred Longstaffe (actually paddling) and Ryan Hladyniuk (paddle out of water) paddling to the center of Barry Lake, Ontario, Canada in order to obtain a sediment core. Courtesy photo.What do you find most rewarding about your job?
That’s a good question. I think the freedom to explore the technical side of science and how the measurement is obtained. The job itself has enriched my life because it enables me to spend time with my family. Plus we live on an island ...

What is the most interesting or surprising thing you’ve gotten to do in your career?
I think it was my first isotopic composition results. I should say my first lakewater results from Lake Ontario because those measurements were the first time anyone had measured that portion of the lake’s history. After months of laboratory grunt work I got the results from the isotope-ratio-mass-spectrometer. My advisor said, “You are the first person to ever do it and to see these results.” – it’s kind of cool. I’ve also met a lot of interesting people throughout my career.

What inspires you or makes you get up in the morning?
Man, I love getting up in the morning. It’s a wonderful job and community that we integrated into. I have fun at work – I love solving problems. In the isotope world, problems always arise. The instruments are so sensitive that any perturbation from the norm will throw something off; it is up to me to find and fix that deviation.

If you were a marine organisms what would you be and why?
I think I have to be a Mako Shark. The Mako instills fear in everyone. You’re fast, have crazy teeth and can do whatever you want. No one messes with a Mako!

Dr. Ryan Hladyniuk is the Core Facilities Laboratory Manager at The University of Texas Marine Science Institute. He arrived last fall with a wife and three kids. He was born in Thunder Bay, Ontario Canada and loves the Texas winters.