Scientists can’t get there but Honey Badger can

Jun 04 Posted by Sally Palmer in Spotlights
Satellite imagery has revealed that large blooms of phytoplankton (single-celled plants) form in the vast Pacific Ocean covering thousands of square miles and lasting for many weeks. 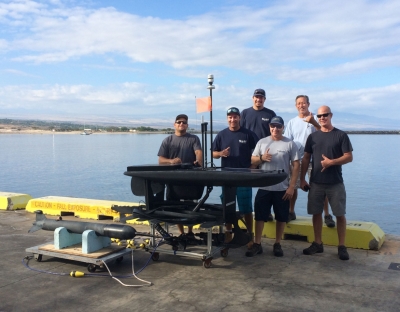 The Wave Glider is an autonomous surface vehicle consisting of two parts, a float on the surface of the ocean connected by a 7m umbilical to a "sub" or wing rack subsea. Together, they work in unison to convert the up and down motion of the waves into forward thrust. As a result, the Wave Glider does not need fuel for propulsion nor does it produce emissions. Credit: Tracy Villareal, The University of Texas Marine Science Institute. Until now, the remote location in the open ocean has made it very difficult to identify what types of plants are creating this massive mat of plant-life and what conditions lead up to these blooms. Scientists Dr. Tracy Villareal from The University of Texas Marine Science Institute and Dr. Cara Wilson from the Southwest Fisheries Science Center of National Oceanic and Atmospheric Administration (NOAA/SWFSC) will be sending out the Honey Badger to figure it out. Their mission named MAGI uses a state-of-the-art Wave Glider®, nicknamed Honey Badger, from Liquid Robotics. The MAGI six month mission kicks off this week to begin sampling where these blooms develop in the Pacific Ocean near a remote region in the horse latitudes at 30°N. The goal of the mission is to identify the species that make up the blooms and then figure out how and when they start to form large balls, or aggregates. Are they an important part of the food chain? What happens to them? Scientists hope to find out.

The Honey Badger Wave Glider will need to be tenacious. Even though these blooms are large, they are quite fickle in their formation and the extreme expanse of the ocean will make it a challenge for the scientists to direct the Honey Badger with the aid of satellite telemetry to the right part of the ocean, at the right time. If they can time it just right, the Honey Badger shouldn’t disappoint. The Honey Badger Wave Glider is a unique piece of equipment, developed by Liquid Robotics Inc., as the first unmanned autonomous marine robot to use only the ocean's endless supply of wave energy for propulsion. It has been customized with a multitude of sensors for this mission. Sensors include a high resolution camera; fluorometer to record presence of chlorophyll and other pigments; weather stations; wave detection equipment; tracking device; sensors to listen for acoustic tags of large marine predators; digital holographic particle imaging system; and last but not least an instrument to record temperature and salinity. All this instrumentation is on an autonomous vehicle, saving the expense and long lead-time required for research vessel operations. It’s a bargain, but even so it’s not an easy task.

This is all possible because Liquid Robotics invited scientists, students and educators to compete in the PacX Challenge competition, which recognized the most innovative application of the PacX ocean data. Dr. Villareal was the Liquid Robotics PacX Challenge grand prize winner with his collaborator Dr. Cara Wilson of NOAA/SWFSC. The PacX Challenge prize consisted of a $50,000 research grant (courtesy of BP, the exclusive oil and gas industry supporter of the PacX Challenge) and six months of Wave Glider time. A National Science Foundation award supported the reconfiguration of the Wave Glider and purchase of additional sensing equipment, all of which was implemented by the Geophysical Exploration Research Group at Texas A&M. Data integration and website development was performed by Bob Simons and Lynn Dewitt at NOAA/SWFSC. This is truly a collaborative effort. 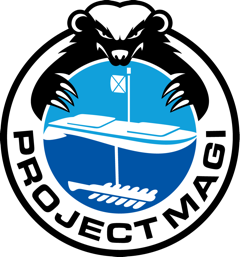 Follow Honey Badger’s journey and the scientists’ quest at their blog, http://magihoneybadger.blogspot.com/.