Seagrass scientists continue work in the wake of a hurricane 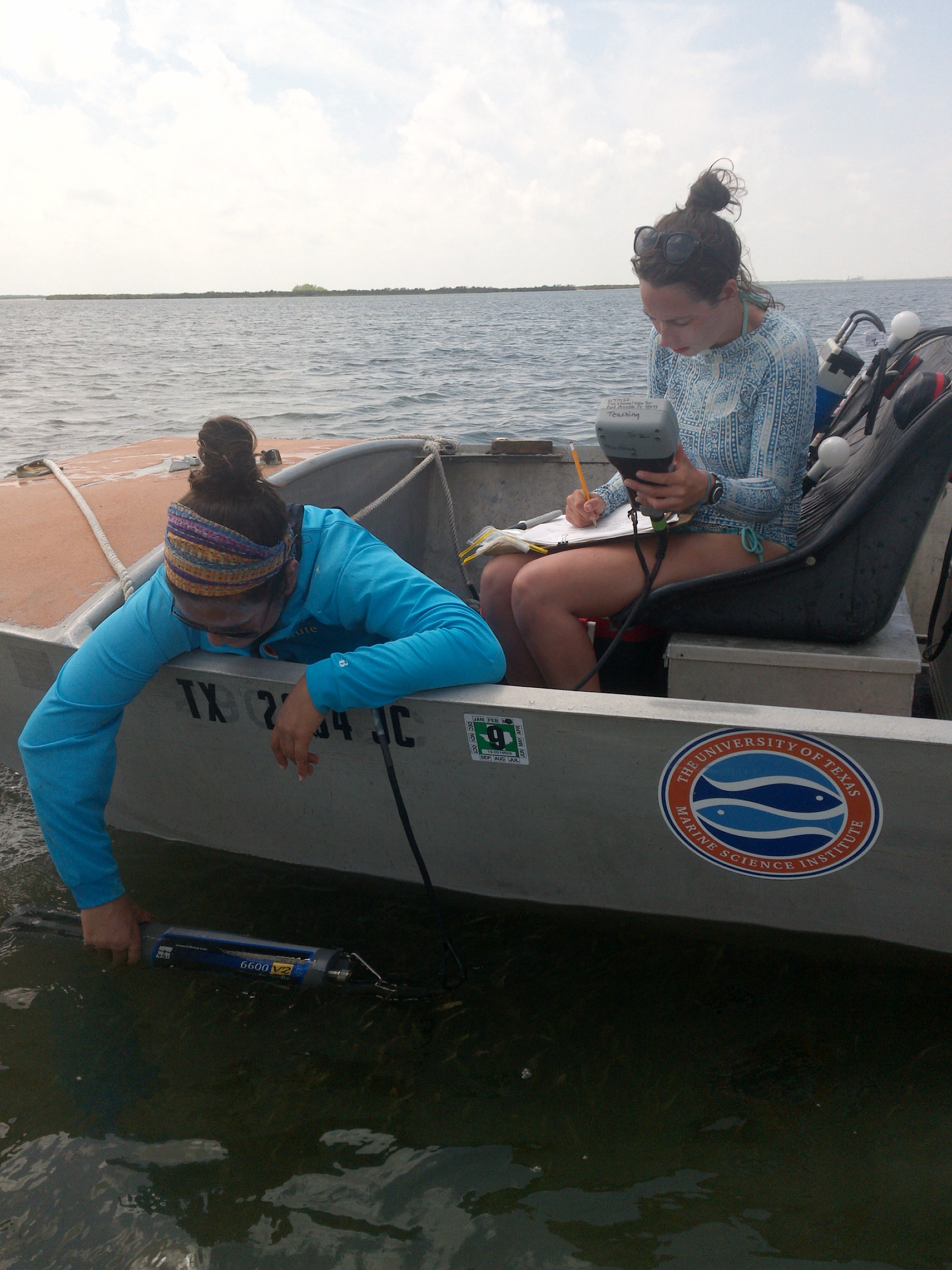 Despite being displaced from their homes and relocated to a nearby university, seagrass biologists at The University of Texas at Austin’s Marine Science Institute are trudging on, literally. For the last two weeks, Professor Dr. Ken Dunton’s graduate students, Victoria Congdon, Christina Bonsell, and Meaghan Cuddy have been battling everything from jellyfish to debris of all kinds to quantify the impact that Hurricane Harvey wrought on seagrass communities along the Texas coast.

Just days after the storm hit, Dunton and his team began to make arrangements to secure the vehicles and boats needed to conduct a rapid assessment of the Coastal Bend region seagrasses. They had just completed their annual assessment weeks earlier on their statewide program funded by several agencies, including the National Park Service, Texas General Land Office, the Mission-Aransas National Estuarine Research Reserve, and the Coastal Bend Bays & Estuaries Program. “In Texas, seagrasses beds provide critical nurseries for many fisheries including flounder, redfish, speckled trout, blue crab and shrimp. We know that a storm like Hurricane Harvey could have a sizable impact and we wanted to get on the water as quickly as possible to survey the possible damage,” said Dunton, a 30-year veteran seagrass biologist.

Just a few weeks after the storm wreaked havoc along the Texas coast, Dunton’s team of graduate students started to survey stations along a gradient of increasing exposure to hurricane force winds - from the Upper Laguna Madre to Aransas and Copano Bays. All of the stations, 128 of them, were sites that they have been monitoring for several years. “I’ve lived in Port Aransas since 1986 and have been studying seagrass from Galveston to Port Isabel, but this event is nothing like I’ve seen before. We are still analyzing our samples, but the damage is severe in many areas,” said Dunton.

A massive sampling effort of this scale is only possible with help. Despite the enormous disruption from Harvey, The University of Texas at Austin’s Marine Science Institute supported this field response through the mobilization of boats and a vehicle. Local universities have also helped. Texas A&M University Corpus Christi’s Center for Coastal Studies have been providing lab facilities for sample processing.
This study will provide a unique opportunity to assess effects of a major storm event on seagrass beds. Seagrasses, like terrestrial plants, require water, nutrients, and light in order to grow. Their high light requirements restrict the depth at which they can grow; therefore, underwater light availability is often the limiting factor restricting seagrass survival. In addition to possible changes in the amount of light reaching the seagrass leaves in response to increased turbidity, Dunton’s team is also interested in how the physical disruption of sediments may have affected the stability of the seagrass communities in the region.

The scientists are finding very interesting things. “While some stations appear relatively unaffected, others were stripped bare, leaving behind only the roots and rhizomes,” said graduate student Victoria Congdon. Results of the study will now be incorporated into the graduate students theses and dissertations. “Going through a hurricane like Harvey has been a big learning curve,” said Congdon. “We needed to adapt and react quickly in order to capture seagrass ecosystem response. It was refreshing in a sense to get back into the field, which looked different yet felt so familiar despite the disheartening and surreal circumstances. We hope our assessment will help us understand how natural seagrass beds can recover after such a big disturbance,” Congdon says with a tired smile. Congdon and her colleagues will use their results to find out how resilient seagrass beds are, but it’s obvious the scientists have already proved their own resiliency.