The Deepwater Horizon oil spill spanned 87 days during which approximately 4 million barrels of crude oil were released into the northern Gulf of Mexico; making it the largest marine oil spill in U.S. history. British Petroleum soon after committed $500 million dollars to fund independent research programs to help understand the impact of the spill. The funds were given to the Gulf of Mexico Research Initiative, a 20-member research board who have already allocated $140 million to 12 research groups. Two of those research groups are doing work at the University of Texas Marine Science Institute. The research program names are DROPPS and RECOVER. You can catch up on the latest DROPPS work at http://dropps.utmsi.utexas.edu/. 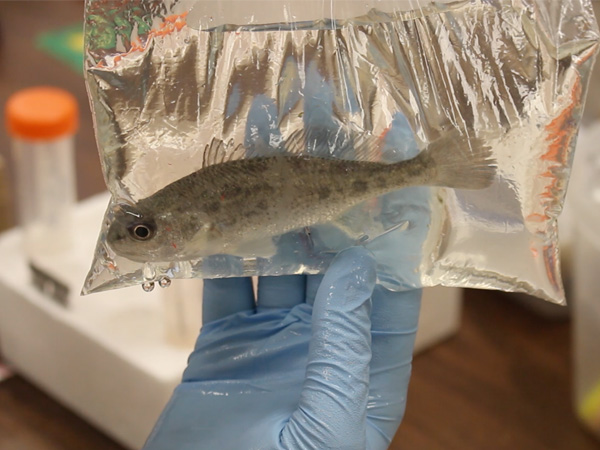 RECOVER scientists are learning how oil can impact the cardiac systems and behavior of Mahi-mahi and Red drum. Credit: Dan DiNicola.RECOVER scientists are examining the detrimental effects of oil on two ecologically and economically important species of fish in the Gulf of Mexico: Mahi-mahi and Red drum. Fisheries professor, Dr. Andrew Esbaugh is leading the efforts to better understand effects of oil on red drum. Red drum is one of Texas’s most famous and sought after fish. Fishing for red drum (or redfish as it is commonly known) is a major tourism draw for anglers to the area and a recreational staple for year round residents. These large sport fish are common – with many lurking in the turbid, murky waters off docks and jetties around town.

The UTMSI location for RECOVER research is a unique reminder of the interrelation between the regions dependence on oil and the surrounding natural environment. The tallest structure in town is an offshore drilling platform, currently sitting and undergoing repair in the channel adjacent to Port Aransas and its operational siblings are always visible on the distant horizon offshore.

At UTMSI, Dr. Andrew Esbaugh and his team are raising red drum, a process pioneered at UTMSI in the 1970’s. Local adult fish are captured and held in large tanks on campus for breeding. This ‘broodstock’ reproduces and spawns thousands of eggs for the team’s research. The adult fish are easily caught with hook and line by boat in the nearby channels. Here, fresh and saltwater mix and large predators – like red drum, tarpon and dolphins – tend to gather, taking advantage of the abundance of prey. In addition to food, red drum use these channels for another important reason.

“Red drum will be congregating in these areas to spawn, their fertilized eggs will then movie into the estuary which they use as nursery habitat” says Dr. Esbaugh. “If you are fishing for broodstock… going to these channel mouths is an excellent opportunity to collect.”

Another method the scientist uses to catch their broodstock fish is with the help of the local ferry dock. At night, lights under the docks and ferries attract large numbers of red drum. The team easily catches these fish with hand lines then drives them a short distance down the road to UTMSI’s hatchery facility. Once a broodstock has been established and they begin spawning, the rest of Dr. Esbaugh’s RECOVER team can get to work.

One Ph.D student, Alexis Khursigara, is conducting an experiment with juvenile red drum by monitoring how oil exposure alters their social behavior. “We are starting with pairs, so putting two fish in a tank and understanding who becomes the dominant fish and who becomes the subordinate fish,” she explains. “The oil is affecting the fish’s physiology and a lot of the factors that determine social success are based on physiology.”

Prior to running her experiments she marks individual fish with a red-orange dye for identification. This dye implant is acts like a temporary tattoo that humans can see, but is believed to be invisible to the fish. She then sets up GoPro cameras to record how the fish interact with each other in the tank over a period of time. “Being a subordinate fish really takes a toll on the fish. They stop eating, they’ll stop swimming, and they just get really beat up. It gets to the point where they have to go into recovery tanks before they can be placed back with the other fish. It just stinks to be a subordinate fish,” she laughs. 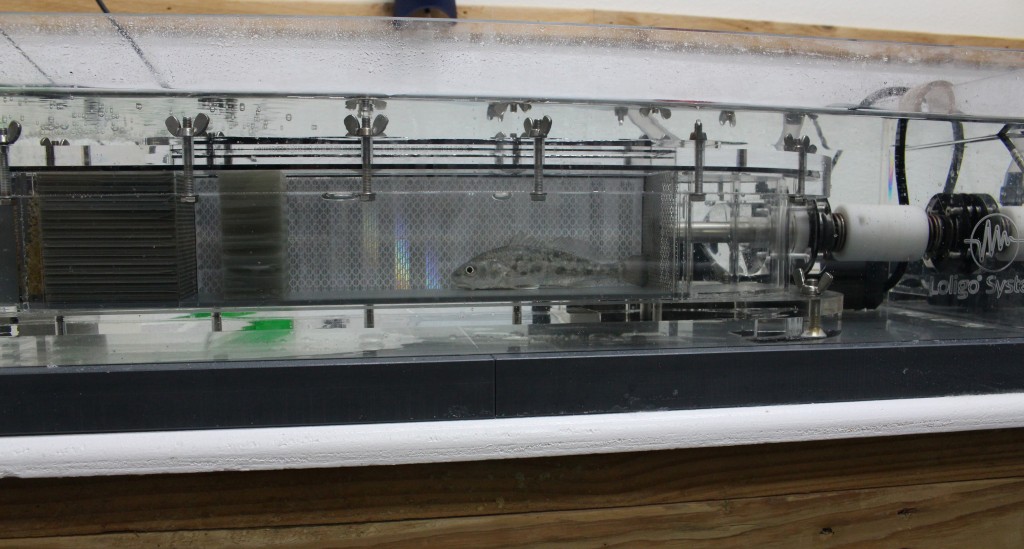 A red drum "treadmill" helps researchers understand how oil exposure affects their swim behavior. Credit: Dan DiNicola.A few doors down from Alexis’ lab on the Fisheries and Mariculture Laboratory at UTMSI, another experiment is underway to determine how oil affects the swim performance of exposed fish. “We basically use a fish treadmill,” Dr. Jacob Johansen says, before he carefully places a juvenile red drum into a swim chamber. The swim chamber is linked to a computer that measures the physical effort the fish is using to swim against a current. Dr. Johansen can adjust the speed of the current, which in turn, manipulates how fast or how hard the fish needs to swim. The data he gets in real time shows him how oil exposure is altering the swim behavior of the animals.

“Swimming is probably the most critical activity the fish perform”, he says, “It’s fundamental to all aspects of its survival including finding food, avoiding predators, finding a place to live, migrations and even reproduction as many fish move to specific spawning grounds each year.” As the RECOVER work continues, scientists, like the team at UTMSI, will further understand the immediate and lingering effects of oil on fish physiology and behavior. What they learn will help us prepare and mitigate for future spills should they happen again.

Story contributed by Dan DiNicola, RECOVER outreach coordinator. Dan is based at the University of Miami Rosenstiel School of Marine and Atmospheric Science where RECOVER colleagues are working on oil spill impacts on Mahi-mahi. You can read more about the research program at: http://recover.rsmas.miami.edu