Congratulations to our newest graduate, Dr. Claire Griffin! Dr. Griffin completed her dissertation defense on Wednesday. We were able to catch up with her to learn more about her research. 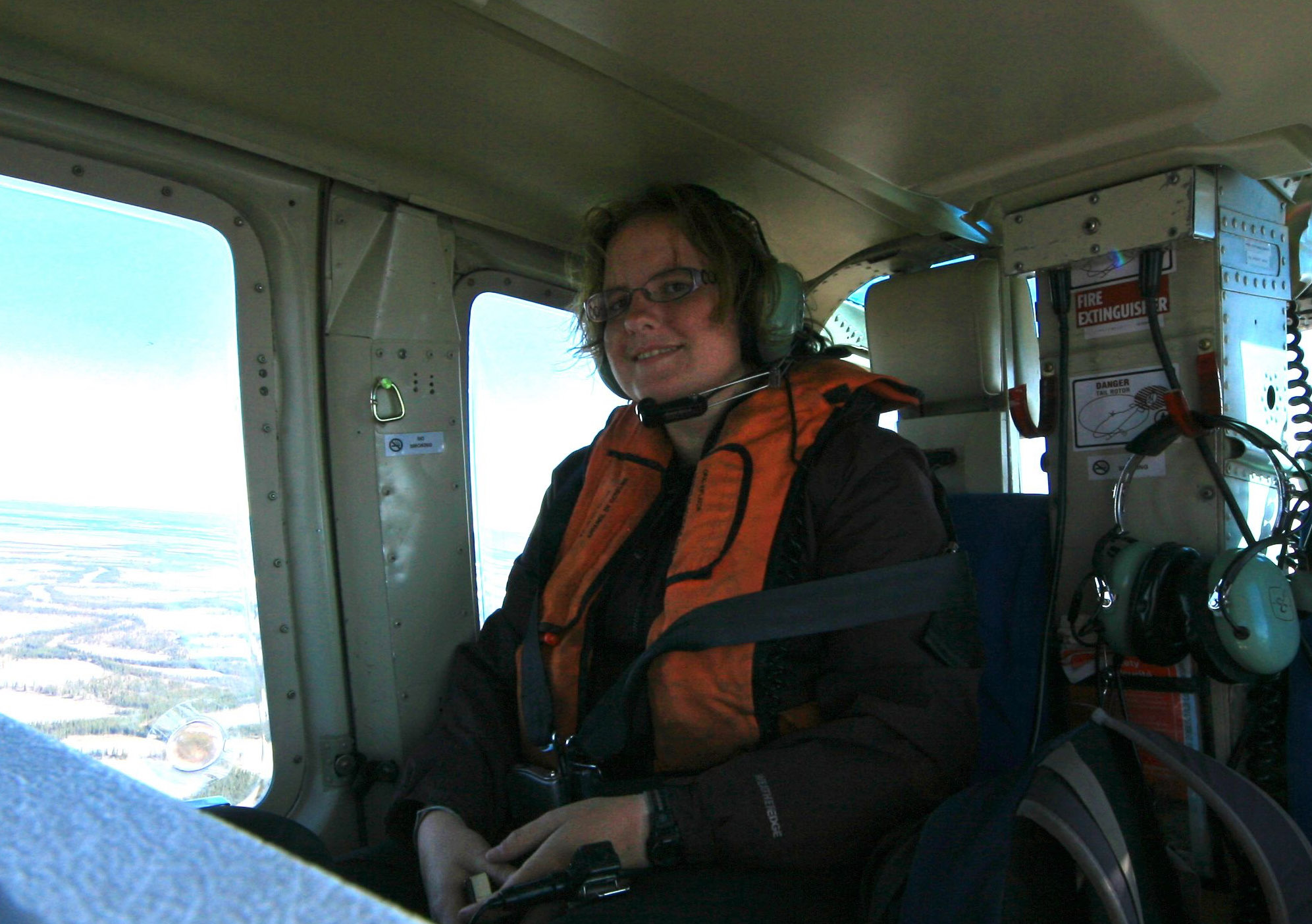 Claire during one of her many sampling trips in the remote Arctic. Courtesy photo.Please tell us a little bit about your research project.
I’m interested in how climate change is impacting the chemistry of Arctic rivers. In the Arctic, rivers contain large amounts of dissolved organic matter that has been leached out of plants and soils, just like steeping tea leaves. The rivers are an important highway that transports this organic matter from the land to the sea. This riverine organic matter fuels the coastal ocean by providing food for microbes and bacteria, and is an import source of energy for food webs. There are also massive stocks of carbon stored frozen in soils from tens of thousands of years ago. As the climate warms and the soil thaws, the soil organic carbon can then be moved from land to streams to rivers and coastal oceans. Microbes can transform this increased amount of carbon into carbon dioxide and methane, which are powerful greenhouse gases. My research uses satellite imagery to help me map how much organic carbon is in rivers and see how that has changed over the last 30 years.

What type of carbon is in the ancient frozen carbon stocks; is it peat?
Some of it! Some of it is actually called yedoma. These are wind-blown dust deposits built up during Pleistocene epoch - about 20,000 to 60,000 years ago. You can look at these ancient frozen soil and even see roots, grass, and seeds stored in permafrost. Some of the soils are mostly mineral soils, with an organic layer on top. Just frozen!

How did you decide you wanted to pursue marine science?
Well, technically I’m not really a marine scientist. I really wanted to work on Arctic climate change issues after doing research as an undergraduate student in Northeast Siberia. I had a great time and learned how those ecosystems are particularly vulnerable to change. I was interested in how much of a global impact they had, but also how beautiful and remote they are in and of themselves.

In 10 years what would you like to have accomplished?
That’s a hard one, I would like to have furthered our knowledge of how vulnerable the Arctic is. It has already changed and is changing as a result of climate. I’d like to have my work to be used to try and rein in anthropogenic climate change, and improve our understanding of the role dissolved organic matter plays in ecosystems. I’d also like my research to be used in more applied contexts as well. Remote sensing techniques have lots of application. For instance, it can be used to detect land use impacts on water quality and begin to provide solutions.

What is the most interesting or surprising thing you’ve gotten to do for your research project?
Traveling to the Arctic as many times as I have (5 times). Alaska, Canada, and Russia are all very different, in terms of both culture and the environment at our field sites. But its fun and interesting to see these disparate places that are all shaped by permafrost and cold. 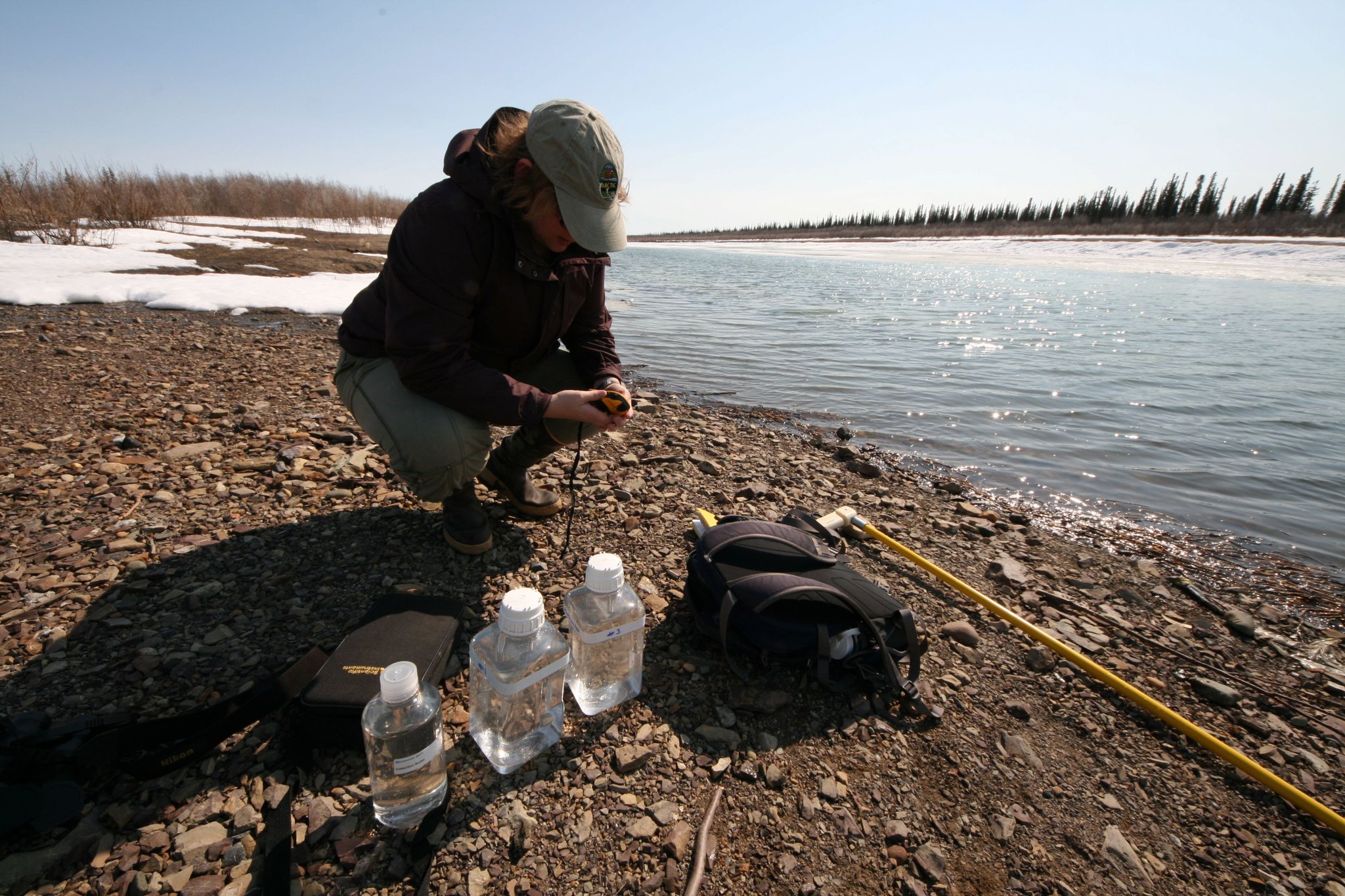 Claire Griffin takes water samples from the Mackenzie River in Canada. Courtesy photo.What’s been the greatest reward of doing research?
I find it really rewarding to just have learned things that no one else knew before. My project has mapped organic matter for over thirty years. These are the first records some of the largest rivers of the world. It’s speculative, but we can see hints that climate is having an impact on those rivers. In one river it’s increasing it in and one river its decreasing based on how much permafrost they have. It’s been really exciting to build such a comprehensive and powerful dataset.

What inspires you?
I’m motivated by a desire to understand humans’ place in the natural world. We have had profound effects on our environment, both directly (think deforestation) and indirectly (like climate impacts). I want to understand how these environments function, and what impact we’re having on them. It’s a puzzle, with very real implications for everything from humans to bacteria to trees!

Why did you choose UTMSI?
I wanted to work with Jim McClelland and his project looking at these massive Arctic rivers. It’s not just one river, but rivers across the entire Arctic system. (6 rivers = 2 in North America and 4 in Russia). Each of these rivers are among the largest in the world, with three (the Lena, Yenisey, and Ob’) nearly the same size as the Mississippi River. We’re looking at the broad scale of Arctic ecosystem and I’m happy to be a part of the project.

What has been your most memorable moment at UTMSI?
It’s hard to pick just one.

If you were a marine organism what would you be and why?
I would be an Arctic diatom, living within sea ice. They form really cool strands of algae underneath the ice, and are an important part of the ocean ecosystem.

Claire graduated from Clark University in Worcester, Massachusetts in 2010 with a bachelor of arts in geography. She hails from Austin, Texas and is pursuing a Ph.D. degree in marine science. This summer Claire will begin as a post-doctoral fellow at the University of Minnesota working on remote sensing of lake water quality.