The 4-week program began in June and in one of the beginning activities the children used drones to help map marine debris. In this activity, students gained a deep personal appreciation for the marine environment, become aware of local and global threats, and learned to solve complex problems using the scientific method. The use of drone in applications such as mapping marine debris could prove invaluable in saving time and money by the ability to cover large areas with less effort than field crews and could also be used during hazardous oil spill situations.

UT Summer Science addresses topics in marine biology and oceanography. While learning about marine biology students will explore different habitats in the coastal environment, dissect marine organisms, learn to identify a variety of species and their ecological significance. As oceanographers, students will investigate the forces of wind and currents, element cycles, and effects of salinity and temperature on marine life.

The Port Aransas South Jetty and KRISTV Channel 6 each ran a stories about the marine debris activity. 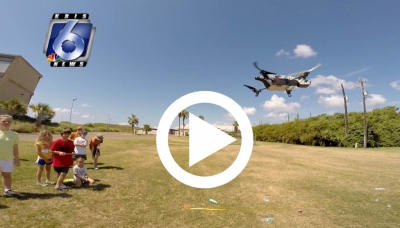