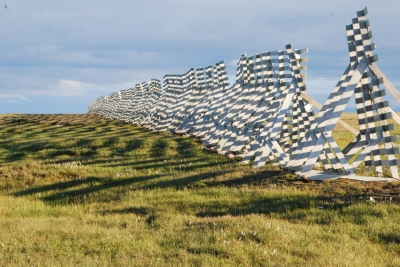 PORT ARANSAS, TX – Ted Dunton was awarded first place for the U.S. Arctic Research Commission’s “Observing the Arctic Photo Contest” in the civil infrastructure category. Ted has been operating the university’s Arctic Whaler research vessel for several years in support of the Arctic (Beaufort) Coastal Lagoons project with the University of Texas Marine Science Institute Drs. Ken Dunton and Jim McClelland. Ted Dunton, who also happens to be Ken’s brother, took the award winning photograph of the snow fences (which are falling into the ocean) at the small Inupiat village of Kaktovik. The village of Kaktovik is the base camp for the Beaufort Lagoons project and K-12 Summer Oceanography Program jointly sponsored by UTMSI and the USF&WS Arctic Refuge.

The Beaufort Coastal Lagoons project examines the linkages between watersheds and the coastal Beaufort Sea to specifically answer the question: “How much carbon from land run-off and erosion is being incorporated into arctic estuarine food webs?” This research project enables the scientists of the University of Texas Marine Science Institute to also impart their knowledge to local Alaskan Inupiat students through the Summer Oceanography Program, where Kaktovik students ages 3-17 are immersed in a combination of field, laboratory, and classroom activities to stimulate their interest in science. Students have the opportunity to explore a range of disciplines including local ecology, environmental chemistry, climatology and more. Both the educational and research programs strive to increase and transfer knowledge of the Arctic coastal ecosystem.
PRINT