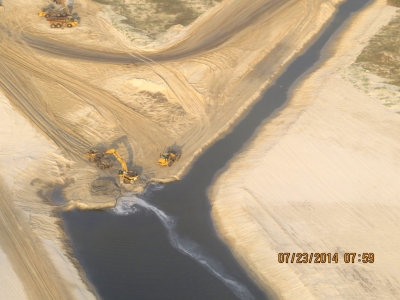 Scientists Ed Buskey and Lindsay Scheef, at the University of Texas Marine Science Institute (UTMSI), are mapping current patterns in the bays and estuary including those that will be affected by the reopening of Cedar Bayou.  Until now, no detailed measurements of circulation in the bays and estuary have been made. Yet these important water currents are responsible for carrying nutrients, sediment, algae, and the larvae of many important species, such as blue crab and red drum, into and throughout the system.

The Mission-Aransas Estuary is located between Port Aransas and San Antonio Bay. With Cedar Bayou closed, water exchange between the estuary and the Gulf of Mexico only occurs at Aransas Pass where tidal currents are very strong. The scientists have measured that tidal influences on currents within the estuary become weaker farther from the pass, but strong effects can still be seen throughout Aransas Bay to eastern Copano Bay 20 miles away.  Mesquite Bay, however, is 30 miles north of Aransas Pass, and tidal effects on circulation there are very weak or absent. 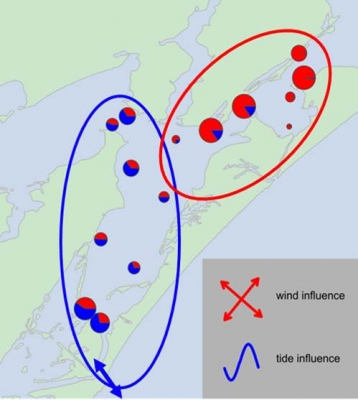 “Tilt” current meters were placed by the scientists throughout the Mission-Aransas National Estuarine Research Reserve to monitor circulation patterns and measure the effects of reduced freshwater inflow. Last year the UTMSI scientists monitored circulation for six months at 15 sites in Aransas, Copano, and Mesquite Bay. They also worked with the Texas Water Development Board and the San Antonio Bay Foundation to add five more monitoring sites in San Antonio Bay.  Now, with the reopening of Cedar Bayou underway, tilt meters have been placed at 11 more sites in Mesquite Bay to monitor how water circulation will change when the pass is open.The scientists have animated the tides and currents in real-time to help explain nature at work.

The UTMSI scientists Buskey and Scheef said that understanding water circulation patterns before and after dredging is complete will go a long way to improve our understanding and appreciation of the big changes in store after Cedar Bayou is reopened to the Gulf of Mexico.