May 22 Posted by Sally Palmer in Spotlights 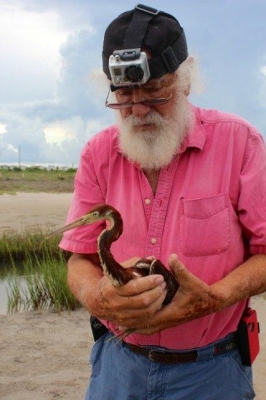 Tony Amos is the Director of the Animal Rehabilitation Keep at The University of Texas Marine Science Institute, which promotes stewardship of our oceans by rescuing and releasing rehabilitated sea turtles and marine birds back to the wild. Credit: Theta Kenney.The U.S. Fish and Wildlife Service’s (Service) Endangered Species Program recognizes outstanding employees on an annual basis through Recovery Champions Awards. This award highlights the contributions of Service personnel and partner organizations for the recovery of endangered and threatened species. This national recognition is awarded for efforts such as working to prevent species’ extinction, conserving and restoring habitat and resources critical to a species’ survival and recovery, scientific research, and public education and outreach. Nominations were solicited from Ecological Services, Refuges, Fisheries and partner groups, and were based on leadership competencies, length of time working on the issues, scope and significance of efforts, and measurable results.

Over the course of more than 30 years, Tony Amos has served as a major contributor to our knowledge of shorebirds, sea turtles, and manatees along the Central Texas coast. Mr. Amos compiled an incredible long-term data set of bird and sea turtle observations that has proven invaluable to the recovery efforts of many species. He has worked tirelessly to rescue and rehabilitate sea turtles and birds, including piping plovers, red knots, brown pelicans, and bald eagles. He is an outstanding spokesman for wildlife conservation in the Texas Coastal Bend region and his dedication to wildlife rescue has been an effective outreach and education resource for listed sea turtles and birds. 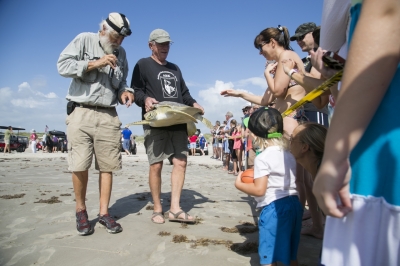 Animal Rehabilitation Keep Director, Tony Amos (left) and Edward “Guy” Davis (right), an animal rehabilitator takes the opportunity during a turtle release of green sea turtles to teach about these endangered animals and why they are important. Credit: Tim Burdick.