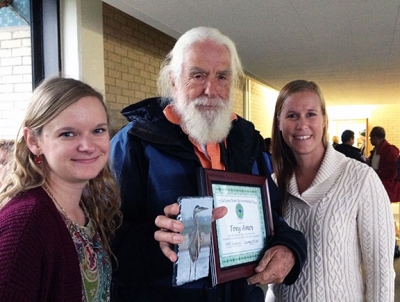 The Annual Green Team Environmental Hero Award is presented by the University of Texas Marine Science Institute (UTMSI) Green Team each year to a UTMSI employee or volunteer that has demonstrated exemplary leadership and sustained commitment to the Green Team mission of creating an eco-friendly and sustainable working environment.  Honorees are people whose enduring dedication has helped solve environmental issues that affect the Marine Science department, UTMSI building/grounds, and/or nearby community. This years’ honoree is Tony Amos.

Tony Amos has been at The University of Texas Marine Science Institute in Port Aransas since 1976 and for the last three decades has surveyed the gulfside beaches of Mustang and San Jose Islands, monitoring the effects of weather and garbage on the fragile dunes. Since 1963, Tony has been on numerous research cruises aboard research vessels. Tony first saw ocean trash in the Indian Ocean in 1965 (Amos et al., 1972) and have been observing ocean debris at sea and on beaches ever since. He advised Texas Land Commissioner and the Center for Marine Conservation on the first Adopt-a-Beach cleanup in 1986 where data cards were used, sat on two National Academy of Sciences/National Research Council committees on marine debris (resulting in NAS publications in 1995 and 2003), conducted marine debris surveys pre-and post-MARPOL Annex V ratification and has monitored trash on Texas Gulf beaches continuously since 1979. He has also written over eight book/book chapters, over 50 scientific publications, and writes a weekly newspaper column for the Port Aransas South Jetty. “He is truly a local environmental hero,” said one nominee.

The UTMSI Green Team is a volunteer group of faculty, staff, and students at the University of Texas Marine Science Institute (UTMSI) that is dedicated to improving the environmental sustainability at UTMSI. The mission of the UTMSI Green Team is to reduce the environmental impact of UTMSI and promote stewardship of our natural resources.  The team meets every other month to discuss issues such as resource conservation, recycling, and community outreach.
PRINT