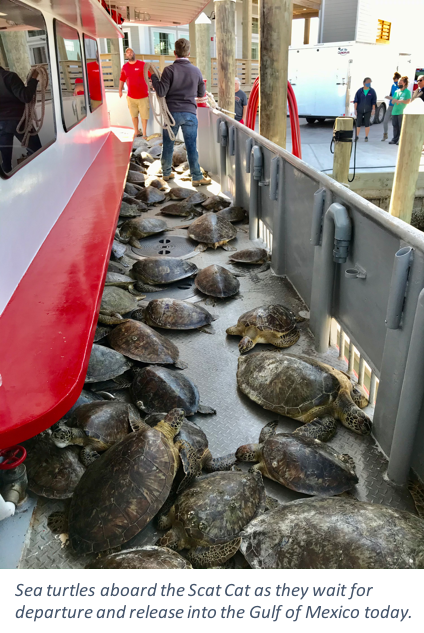 The winter storm Uri caused damage and hardship across the state of Texas. The effects were felt state-wide include along the Texas shoreline as thousands of sea turtles became stranded in the largest cold stun event ever recorded. As of 2/22/21 the Amos Rehabilitation Keep (ARK) at The University of Texas Marine Science Institute has received close to 1,300 sea turtles that were stunned by the cold-water temperatures. As the sea turtles started arriving, the ARK’s sea water tanks were quickly filled to capacity and the overflow went to the Institute’s heated auditorium. As of this morning there were over 700 turtles in the auditorium floor that are being treated by lubricating their shells and with eye drops to try to prevent dehydration. Many of these sea turtles will be boarding the Scat Cat and Wharf Cat today from Fisherman’s Wharf in Port Aransas. The vessels whose time and fuel are being donated by Port Aransas Fisherman's Wharf, will take approximately 300 turtles at a time and release them 30 to 50-miles offshore into waters that have since warmed to the 55-degree threshold that is required to prevent a secondary stunning event. Additional releases are planned for Tuesday as well.