The Making of the Film – Creation of an Artificial Reef 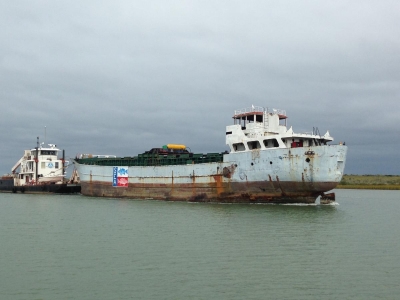 PORT ARANSAS, Texas - The University of Texas Marine Science Institute (UTMSI) is teaming up with long-time partner, Saltwater Fisheries Enhancement Association (SEA) and Texas Parks and Wildlife Department, to film the sinking of the cargo ship, Kinta S., to create a new artificial reef off the coast of Port Aransas and Corpus Christi. The artificial reef is the newest endeavor of SEA to return money raised in the Coastal Bend to enhance our local fisheries and provide a new recreational opportunity for the state of Texas. SEA has teamed up with Texas Parks and Wildlife Department to fund the creation of this artificial reef for the enhancement of coastal fisheries. The sinking is being filmed by Dr. Brad Erisman, a fisheries biologist with the University of Texas Marine Science Institute, and professional videographer Alfredo Barroso Ruiz. The crew also plan to monitor the artificial reef to track how fish and other organisms begin to colonize and populate the Kinta S. vessel. 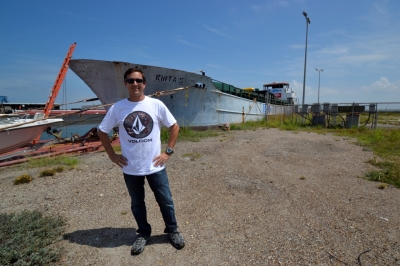 Dr. Erisman is a highly accomplished marine biologist joining the University of Texas Marine Science Institute (UTMSI) from the Scripps Institution of Oceanography in La Jolla, California.   Dr. Erisman’s areas of special interest are fish behavior and reproduction, fish population dynamics, and most intriguingly fish spawning aggregations. His many accomplishments include founding a 20 institution bi-national research program to define connections between marine ecosystems and human-use activities in the Gulf of California in Mexico, which informs sustainable management and conservation practices for productive fisheries in the region.

Alfredo Barroso Ruiz is a renowned videographer whose work has been featured on, among others, British Broadcasting Corporation, National Geographic, Public Broadcast Service, and the Discovery Channel. Alfredo grew up exploring the coral reefs of Havana, Cuba. After receiving a master degree in General Biology, he worked as a dive instructor in Cuba, which was followed by underwater film instruction in Canada. Alfredo has filmed underwater for commercials for brands like Volkswagen, Gatorade and Gillette. He is also a conservationist and has put his filming skills to the service of conservation organizations like World Wildlife Federation and Greenpeace. Alfredo Barroso Ruiz has worked as an underwater, topside and aerial camera operator for several productions and has filmed frequently for scientific organizations like Scripps Oceanographic Institution and the Baja California University.

Saltwater Fisheries Enhancement Association (SEA) a non-profit organization dedicated to promoting the conservation and preservation of our saltwater resources for the benefit of recreational users.  SEA was formed in late 2000 as a grassroots organization focusing on raising money locally to address issues and support projects benefiting the inshore and offshore saltwater resources of the Coastal Bend of Texas.  They have partnered with the Texas Parks and Wildlife Department’s (TPWD) Artificial Reef program to create a new artificial reef off the coast of the Coastal Bend. SEA began working with the Walter Marine Company to get the right boat for the job. The Kinta S. will be placed in-between Packary Channel and Port Aransas in 78 feet of water and within 8 miles of shore. It’ll be placed next to an artificial reef with reef pyramids that SEA and TPWD just placed last October. The two reefs will provide wonderful habitat for fishing and diving opportunities by locals and tourists.

The Kinta S. is a 702-ton cargo ship that was “born” in Japan in 1975. Since then, the vessel has undergone several owner and name changes. Its longest job was carrying cargo in a route from Miami to Haiti. The Kinta S. continued to be in service operating along this route until a violent Atlantic storm rendered it unfit for service. It was then sold in a federal auction to a shipping agent who then sold by way of a tall tale of a lucrative Caribbean fishing venture to a Houston jeweler. The jeweler tried to refurbish the vessel but soon realized that it was not worth the effort. That’s where Walter Marine came into the picture. Walter Marine is a company that specializes in creating artificial reefs. They recognized that the Kinta S. would make a great artificial reef and towed it to their home base in Alabama. The sinking of the vessel in Texas waters will be Walter Marine’s 16th artificial reef that they’ve helped create.

The Kinta S. will slowly slip beneath the surface and land in 78 feet of Gulf of Mexico water. It will be laid down stern first and take only 30 minutes to settle onto the bottom. The contractors, Walter Marine, have taken care to cut air escape holes in every compartment so that the vessel will land straight and true to the location. Check out the UTMSI’s facebook for real-time updates!

Turning a Vessel into a Fish Hotel

Hard surfaces in the Gulf of Mexico are hard to find, but when they are present marine plants and organisms cling to them for dear life. Marine species often require a hard substrate to complete all or portions of their life cycles. This is what creates the reef effect. Upon sinking, the Kinta S. will soon begin its new life as artificial reef. After just a few days, it will begin to be colonized by algae, and then small animals such as barnacles, sponges, clams and corals. Many of these organisms are the food sources for the baitfish and then larger predators like grouper, snapper, and sharks. Since the Kinta S. will be one of the few hard surfaces on the bottom of the Gulf floor, it will soon support these fish species that recreational fisherman and divers enjoy.