This fall, UTMSI is pleased to announce that Drs. Bryan Black and Zhanfei Liu have been promoted to Associate Professor. Both of these researchers have a tremendous amount of experience and are blazing new trails in their respective fields. Dr. Black recently published two manuscripts in the journal Science, which is one of the most respected scientific journals in the world. Dr. Liu is a blossoming leader in the chemistry of oil, and his results are well sought after in the wake of the Deep Water Horizon oil spill. The following is a little bit of background on these two rising stars and what their research entails. 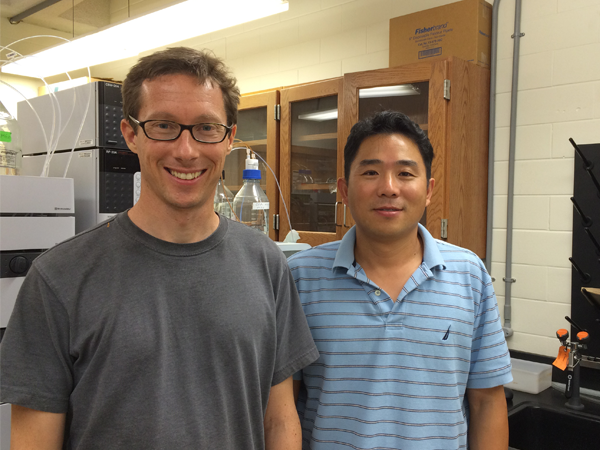 Bryan Black studies the influence of climate on marine and terrestrial ecosystems
Trees are living chronometers of the environment, faithfully recording past climate and forest disturbances in the properties of their annual growth rings. A wide range of aquatic organisms including fish, bivalves, corals, and even some marine mammals also form annual increments - and can be surprisingly long-lived. Dr. Black applies methods developed by tree-ring scientists (dendrochronologists) to generate continuous, exactly dated chronologies from marine and freshwater species. These aquatic growth ring time-lines can be compared with tree ring data and other biological records to understand relationships between aquatic and terrestrial ecosystems, and to reconstruct environmental and climate conditions far into the past. Read more about how Dr. Black is Using Clams to Determine How Much Fresh Water Texas Bay Systems Need and Fish, seabirds, and trees: Long-term perspectives on climatic and ecological variability in the California Current.

Zhanfei Liu studies processes of marine organic geochemistry and environmental analytical chemistry
Marine organic compounds are produced in the ocean surface through photosynthesis and are modified by bacteria or zooplankton; some are preserved by interaction with minerals. Dr. Liu’s research investigates the source, distribution, and changes of organic compounds in marine environments. Knowing geochemical behaviors of organic compounds is critical for a better understanding of global carbon cycle and nutrient dynamics. Dr. Liu is also interested in geochemical behaviors of petroleum hydrocarbons in marine environments. Read more about how Dr. Liu is Cracking the Code of the Dead Zone and Weathering of Crude Oil in the Gulf of Mexico.